4/16/2016 Africa , Animal Encounters , Salt Water , Scuba Diving , Tanzania , Tidbits Edit
The whale shark is the largest species of fish with some adult whale sharks growing to the size of a London double-decker! Despite its giant size, the whale shark glides through the water by moving its enormous streamlined body from side to side in full gracefulness and elegance, as if the queen of the ocean. 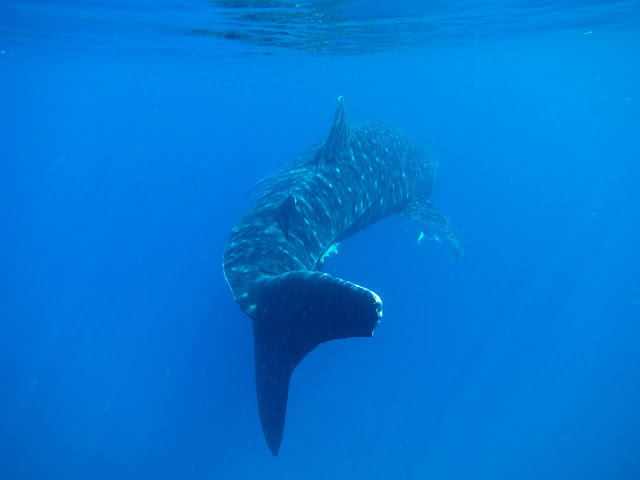 Much as docile and gentle it is, a frontal encounter with its broad, flat head would be quite a nerve-wracking experience. The whale shark swims with its gigantic mouth fully open, sweeping plankton, krill, fish eggs and other goodness that comes in its way. When you see its gaping mouth, you may feel like being swallowed whole! I'd say quite a normal feeling given the fact that whale sharks can have over 3,000 tiny teeth in their gargantuan mouths, which can stretch to the widths of 1 to 1.5 meters (3 to 5 feet). 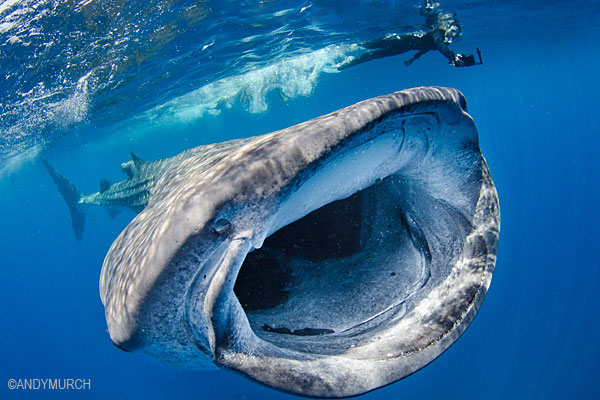 Don’t worry, you'll leave the water with all of your limbs in tact! Swimming with whale sharks is a very safe activity for humans. Unlike many other species of shark, whale sharks don’t bite and they don’t chew. They are filter feeders and feed almost exclusively on plankton similar to whales (one reason why it is called whale shark, though it is not a whale).

Beyond any doubt, being sized up by the largest fish on the planet is a one-of-a-kind encounter, one of the most thrilling and humbling experiences in my life. The gentle fish is no wonder an alluring target for adventure seekers and animal lovers alike. 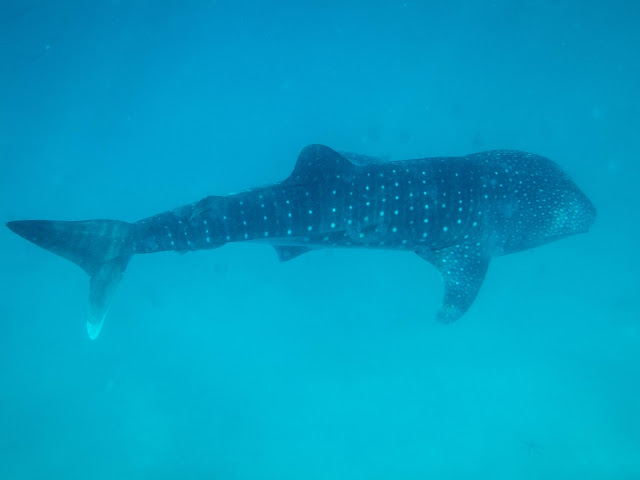 The gentle giants visit the waters to the west of Kilindoni town every year from October to March. Once in Mafia, going on a whale shark safari is a must-do experience you should not pass up on. Simply because it was so amazing, I did the safari twice and swam with four different individuals in total. And here is how the safari experience looks like.

As soon as you set off into the open ocean on a small boat, the guide starts watching for giant shadows. This search may take several hours, and spotting a whale shark might feel hopeless in certain conditions. But don't let your hope fade away. Instead, trust your guide's knowledge and your good luck. You will spot at least one.

When the guide notices a dark silhouette below the water from afar, he asks you to get ready. The boat slows down but does still follow the gentle animal. And then the guide points to an emptiness in the ocean and shouts: "Over there, jump! Jump!" You feel an instant thrill when the guide gives the command to slide into the sea. At this point, you should not ask "What? Where?" or even attempt to see the shadow he is seeing. Just point your camera to the direction of your guide's finger, slip overboard and peer into the blue! Et voilà:

The shark in this video is a baby, around 3 meters long. Since there were too many snorkelers chasing this one, we left the area in search of another, bigger one. Soon later we encountered an enormous whale shark, estimated 10 meters long! It was so huge that even the captain jumped in for a swim! In the video below, you'll see that I had hard times to frame the shark.


Upon seeing this giant, gliding below the surface THIS close to our boat, propelled by graceful sweeps of its tail, my heart literally skipped a beat. I hesitated for a moment before jumping in, and let out a piercing scream through my snorkel once in! Swimming alongside an animal as big as a school bus is such a mind blowing experience that you can't help but scream — even underwater.

After such an up-close encounter, you now fully understand why whale sharks are known as "gentle giants". Don't be fooled by their slow appearance though. Whale sharks aren't the fastest swimmers, reaching an average speed of 5 kph / 3 mph, yet they will disappear out of sight within mere seconds or minutes — simply too quick to keep up with even if you are a confident swimmer.

High on the extraordinary feelings, I had hard times to keep up with the whale sharks, too. Each swim lasted no longer than 2 minutes, and I had to be extremely quick in task-switching between taking photos, videos, and observing the giant fish with my very own eyes in such a short time frame. Here is the shaky video from our fourth encounter with whale sharks, an average sized adult (around 6-7 meters), still hard to frame in, until it swims deeper and deeper, and disappears within a minute.


Being close to these majestic creatures is a thrilling experience like none other, but it must be done responsibly. This activity can be hazardous for the whale sharks, which are listed as vulnerable by the International Union for Conservation of Nature.

Choosing a reputable tour operator is crucial for your safety and the safety of the whale sharks. Try to book with a local company rather than a large tour provider. Too many guests on a boat will turn the whole experience into chaos with the fish being chased and harassed. Ideal group size is no more than four.

Beware of the companies promising to get you closer to the whale sharks. Those are certainly not caring about the well-being of the sharks and putting them at risk.

On Mafia Island, a handful of operators offer trips during the whale shark season. Some claim to be eco-friendly by simply conducting the safari on a traditional sailing boat, in order not to disturb the shark with the motorboat sound. But at the same time they put simply too many guests on that huge boat, all chasing the same animal. We went with Afro Whale Shark Safari for a more secluded experience, and I can highly recommend them (click to read my review on Tripadvisor). 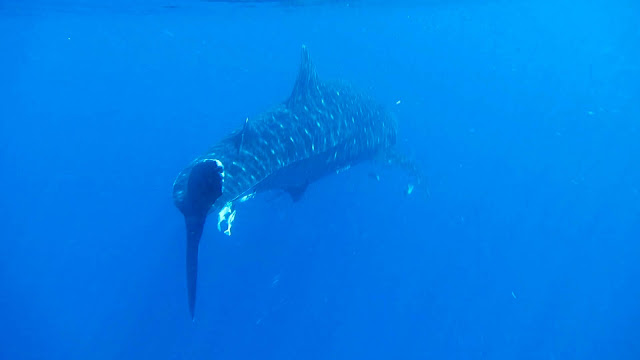 Regardless of which operator takes you out, you should follow the same restrictions and rules. Listen carefully to the instructions given by the tour guide, and follow them accordingly. Most of the rules are meant for the wellbeing of the sharks, as there’s very little risk of humans being harmed by them. The only concern for humans is being hit by accident from the tail of the whale shark, thus, always try to keep a safe distance (approx. 3 meters from its head and 4 meters from its tail).

No matter how tempting it may seem, don’t touch the sharks, try to hitch a ride on them, chase them, block their path, or try to feed them. When you make them feel uncomfortable, they will disappear from sight faster than ever. So, be a respectful gentleman / lady to extend their stay with you.

Wear only biodegradable sunscreen, or better yet rash-guard. Don’t wear any lotions, perfumes, or other chemical substances. Don’t remove anything from the ocean, don’t touch the corals, and needless to say don't throw litter in the ocean. In short, don't mess, or let others mess with the healthy ecosystems whale sharks need in order to live and breed. 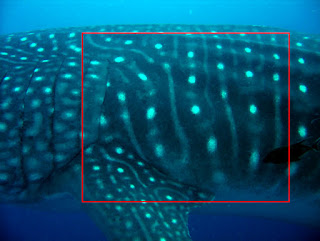 It's sad but true: whale sharks are in a lot of trouble. You can contribute to their conservation by doing your best to protect their habitat, as well as through the money you fork over for responsible whale shark tourism. Every little bit counts! 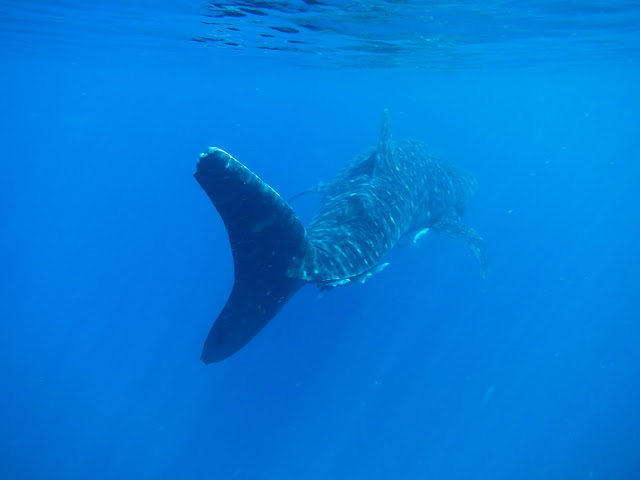