Hugging Earth On The Wing — Hang Gliding in the Bavarian Alps

9/06/2016 Airborne , Bavaria , Day Trips from Munich , Europe , Germany Edit
It's a bird...it's a plane...it's me in tandem soaring like an eagle over the forested mountains, treetops, pretty villages, and lush meadows in the Tegernsee Valley, where summits, air and water merge into a tremendous view! 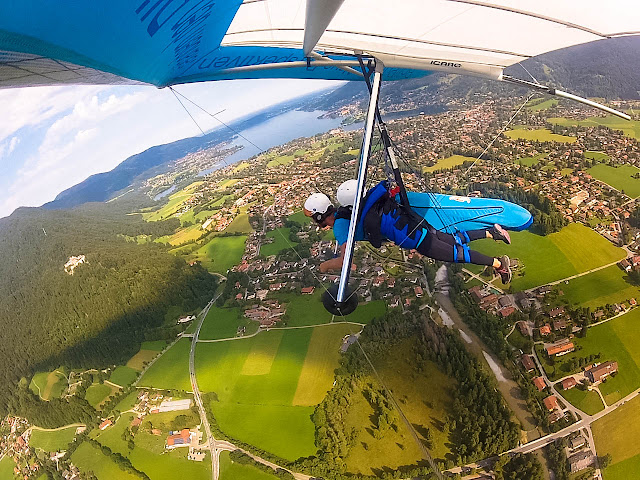 Catching the invisible lifts of air and defying gravity has long been a dream of mine. Well, in fact, flying like a bird is the humankind's oldest dream. History is full of tales of man’s countless attempts to fly with artificial wings made of feathers or cloth. It's hard to pinpoint exactly when the dream of Icarus became a reality, after all, flying is not just for the birds anymore.

Of all the forms a man can fly, hang gliding gives the closest sense of 'flying', i.e., carving through the air in all three dimensions. And I can’t imagine a better aircraft for my very first unpowered flight. The experience of soaring like a hawk thousands of feet above the ground, lying prone in a hang glider harness and gazing down upon the Earth is sensational, in the literal sense. To do this surreal and beautiful activity in tandem, all you need is to find an experienced pilot and to run as fast as you can.

Summer is a time when the European Alps are considered to be in good condition for flying, and the Wallberg (1,722 m)—about an hour south of Munich— is one of those popular peaks among hang gliders and paragliders alike. The launch site is a grassy field at the edge of the mountain, just a little further down the cable car station at 1,620 m altitude. And there I meet my pilot on a beautiful summer day to fly away.

"All you need to do is to run as fast as you can" explains Christian while assembling the hang glider. To launch, the pilot must run down a slope to get air moving across the wing and you have to do the same in sync. That’s the most important thing in a tandem flight: you have to become 'one' with the pilot. I kind of start wondering wildly if I missed a step would we crash to the ground, life flashing before my eyes? As I start getting anxious by this thought, Christian helps me get into the harness and helmet. Upon suiting up, we practice running together until he feels confident that we are running in unison and fast enough.

Once satisfied, Christian moves the glider to the launch site and hooks me into the hang glider on the ground. Next, we get to the takeoff position at the edge of the slope. This is where the rubber meets the road and my adrenaline starts pumping. What if I missed a step? 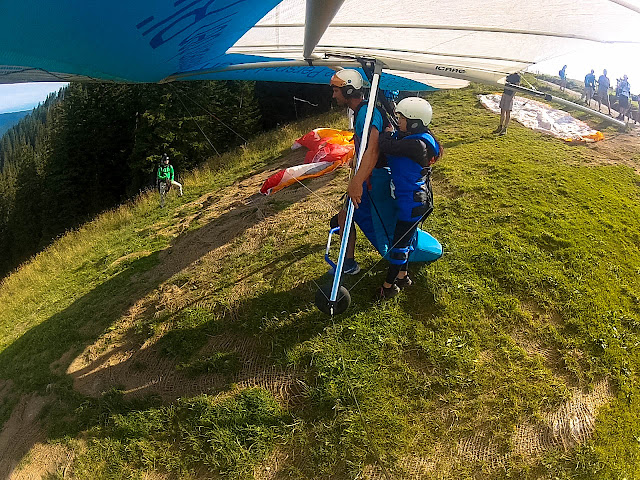 Then I remind myself that Christian, the owner of the hang gliding school in Tegernsee, is possibly the best tandem pilot I can ever find. After all, he had placed first in the German hang gliding championships a couple of years prior and has been flying for a living ever since. To top it off, he's been doing this sports for over 20 years with over a thousand tandem jumps under his belt. Given my tiny size he would without doubt be able to bring me down to the ground safe and sound. I have absolutely no reason to worry!

Slightly reassured, we go through the safety checks: "Hold the handles at the back of my harness, keep your head out of the frame, chest out, shoulder back, stand on tiptoe, make yourself big." Big like a vulture preparing to take wing.

And then go, go, go! Off we run into the deep valley below. And in like two steps, we get flying! Seriously, are we already airborne? On solid ground one moment and airborne the next? 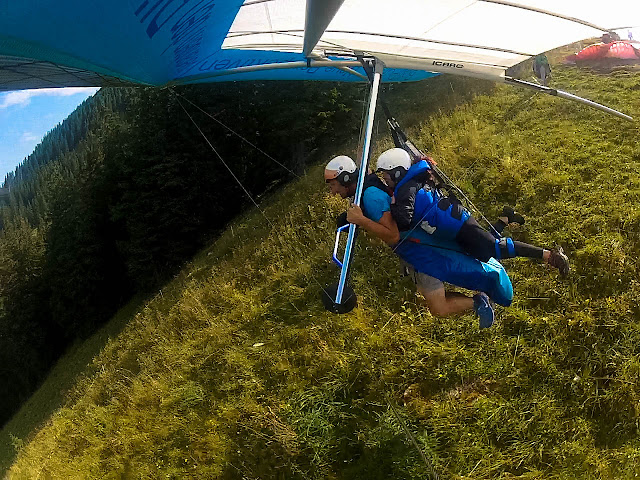 Hardly after leaving the ground, a sudden drop feeling scares the hell out of me that I can't help but give a little scream of fear. Christian reassures me that everything is alright, we are stable and flying already like birds. 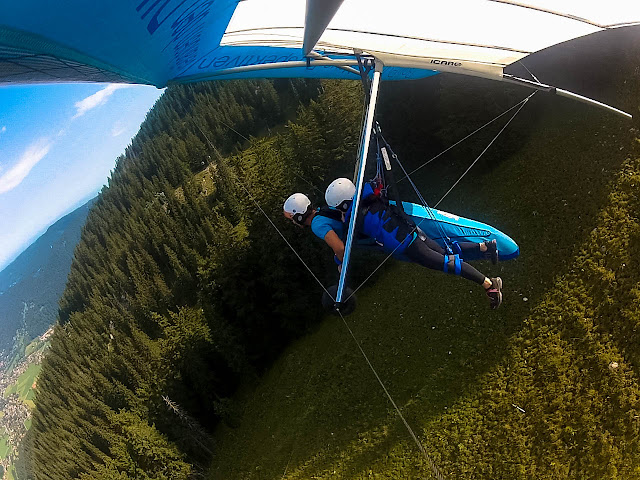 That “what on earth have I done?” feeling luckily lasts only a second or two, and it is quickly overcome by the tranquility of gliding smoothly through the gentle breeze of air.

We are high. So very high.

As the sound of airflow grows, I start flashing smiles with a sort of excited energy, like a child opening a birthday gift. It is not like a quick adrenaline release, it is more lasting kind of happiness. It is peaceful, stunningly beautiful, awe-inspiring at the same time.

My pilot's skillful use of the wind force to manoeuvre the flight makes me feel safe. Although, I obviously don't feel safe enough to leave the two red handles at the back of his harness. The wind and my instructor are keen to have an adventurous flight with lots of circles, swoops and quick drops. Simply similar to being in an airplane, it is quite normal to experience sudden turbulences. But knowing this fact does not make me feel any comfortable while being suspended freely in the air, and I can't prevent my stomach from dropping as much as we do. I know, I know...I should have rather titled this post "Hugging The Pilot" :)

Nevertheless, the sensation of soaring like a bird is unique, the scenery is absolutely breathtaking that I keep flashing more and more smiles! 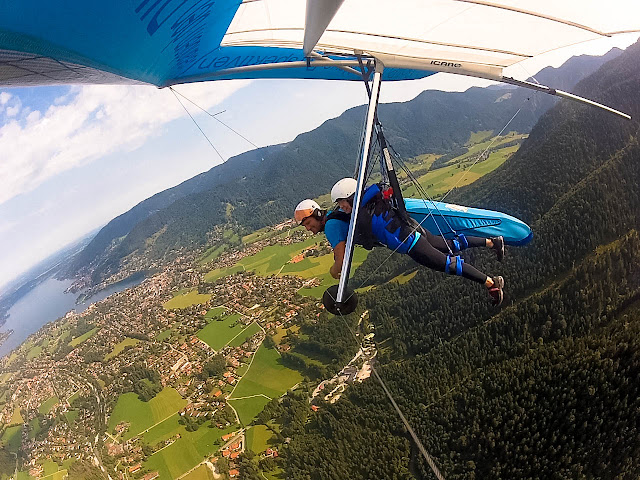 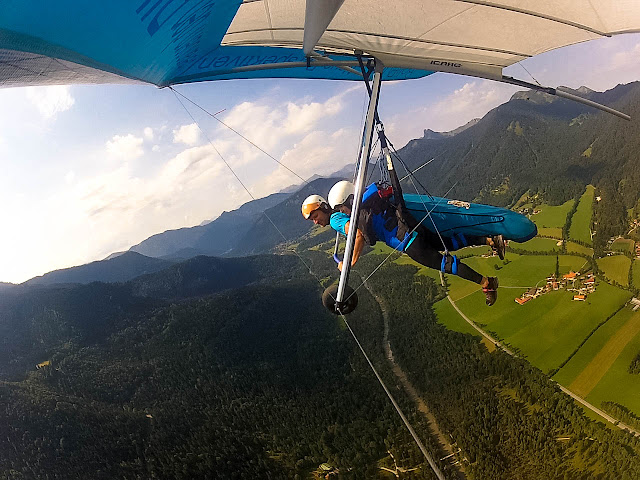 Time flies even more quickly in flight! And Christian already starts instructing for the touchdown. The landing can be one of two ways—standing up or rolling on the glider’s wheels. Our landing is going to be a rolling one. All I am supposed to do is to raise my arms and pull my body upwards to avoid contact with the ground. 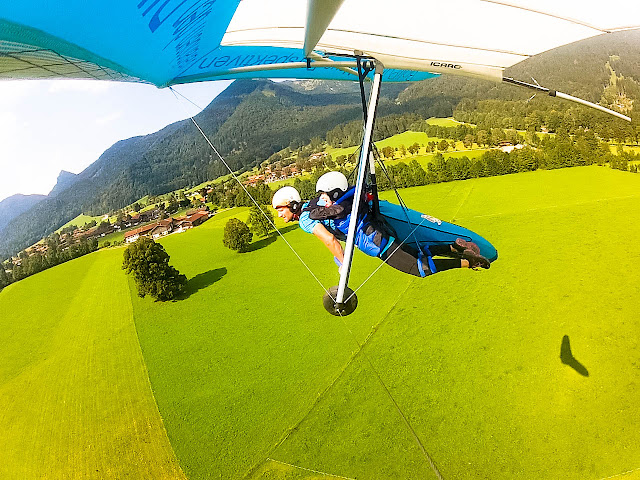 This part of the flight releases more adrenalin than expected, as we circle over the houses in an attempt to land on one of the empty fields, separated by ropes. With my heart in my mouth, we fly over one rope, hit the ground and come to an instantaneous stop before crashing into the second one.

Phew! All is good.

Yes, please! The rush of flying is addictive, and I am certainly not the only person who, giddy after a perfect flight, can't wait to put his/her head up in the clouds and fly like a bird again!

Back on the ground, grinning from ear to ear for hours, I completely agree with Leonardo da Vinci: "For once you have tasted flight you will walk the earth with your head turned skywards, for there you have been and there you will long to return". 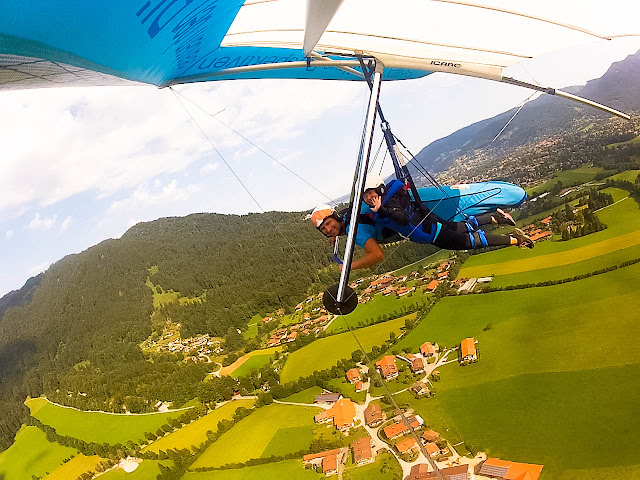