3/11/2017 Africa , Animal Encounters , Uganda Edit
Catching Silverback's deep-set soft brown eyes in his natural habitat was the most anticipated moment of our safari trip to Tanzania and Uganda. Partly because it took me three years to convince Tom to fork out a small fortune for one hour with these seemingly dangerous animals. Just one hour, that's all you get with mountain gorillas for upwards of 600 USD. Ouch! 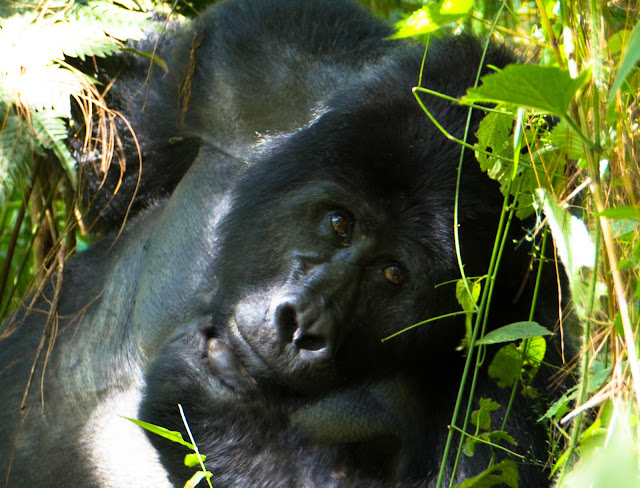 Year by year, I would keep on explaining that mountain gorillas may have immense strength but they are shy and gentle creatures, that they’re vegetarians, that they may—admittedly— come close but there is little chance they will actually hurt you. 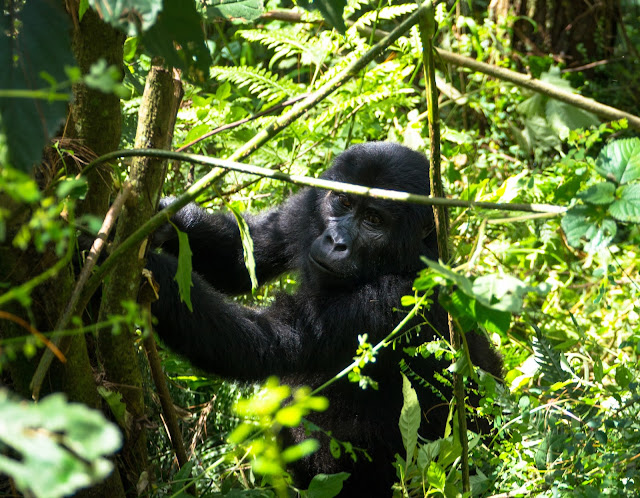 Okay, okay, I admit: Permits to see the gorillas are heartbreakingly expensive but this income is used both to protect their habitat and to help the local people who share their backyard with gorillas. 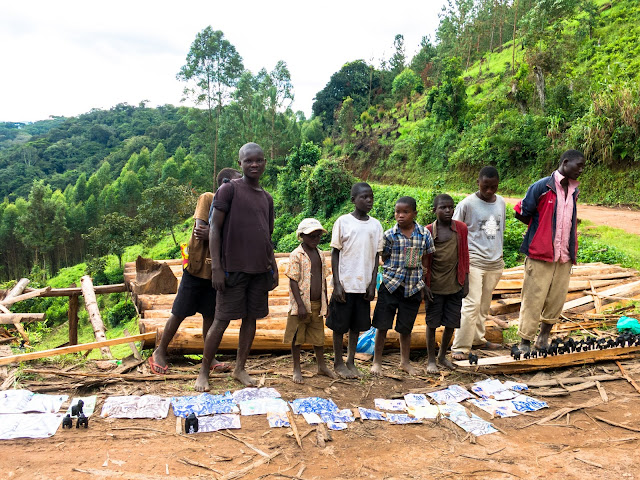 While I was trying hard to persuade Tom, Uganda Wildlife Authority introduced discounted gorilla tracking permits in the months of April, May and November (350 USD back in 2015). Consequently, this highly restricted activity with a species on the brink of extinction became instantly a part of our itinerary!

Mountain gorillas, aptly named, live in forests high in the mountains, a fertile region both rich in biodiversity and human population. 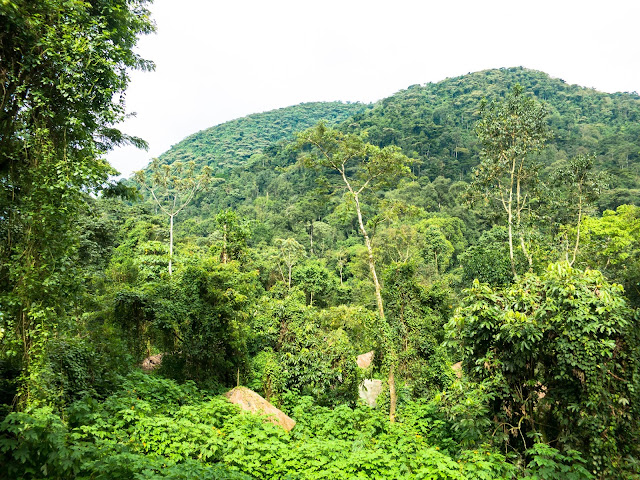 With the growing population, the people have moved closer to the gorillas' territory for settlements around them. Deforesting, poaching and diseases transmitted by humans have led to a dramatic decline in numbers, pushing mountain gorillas to the edge of extinction. 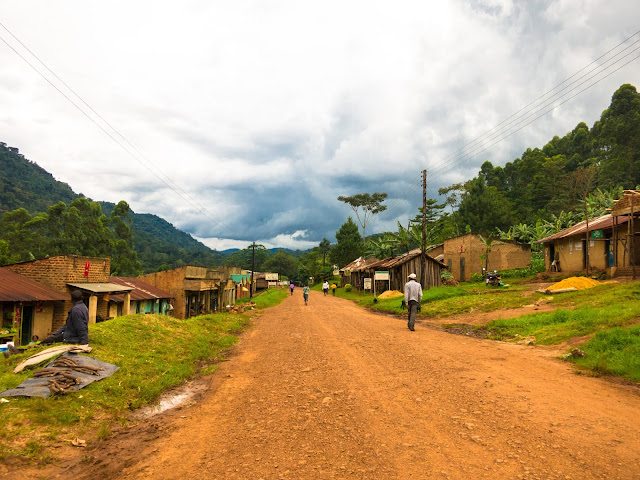 Thanks to dedicated conservation efforts and cash motivation of local communities through wildlife-based tourism, the gorillas are today on the road to recovery. 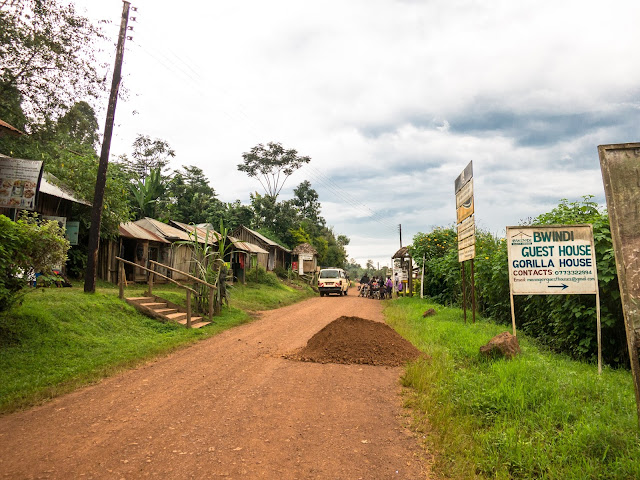 Despite the fact that mountain gorilla tourism is a conservation success story, the largest of the great apes are still the most endangered: Fewer than a thousand remain in the wild, scattered across Rwanda, Uganda and Democratic Republic of Congo.

Roughly half of the total mountain gorilla population lives in Uganda's so-called Bwindi Impenetrable National Park. A handful of these social groups are habituated to the presence of humans, and can be tracked in a small group, accompanied by a guide and armed ranger. 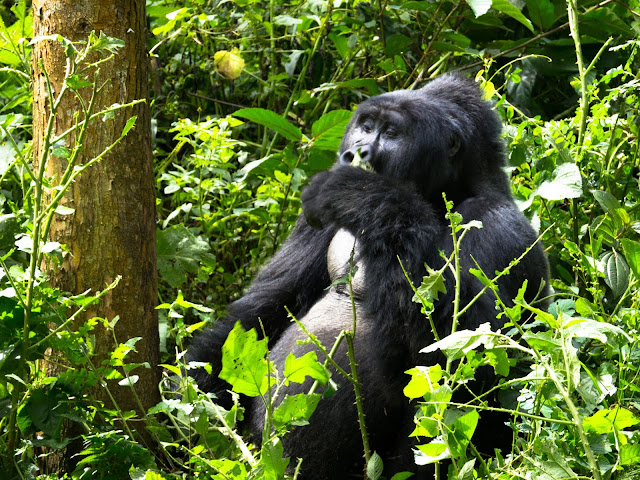 Getting up close and personal with these massive creatures is within reach for anyone with a reasonable level of fitness (and a fat purse). The treks vary according to the location of each group and their daily movement. They may be mere minutes' walk away from the park entrance, or they may be hours of hard walking up hillsides and along slippery paths.

We gather at the park headquarters for the briefing at 8:00 am. Our lead guide, David, explains that our DNAs and those of the gorillas are 98% identical. Not much separates a human from gorillas, as such, they are susceptible to human illnesses. Anyone with a flu or similar, please, skip the track to prevent spreading it. Nobody? So, we get divided into groups of eight and the action starts at 8:30 am. 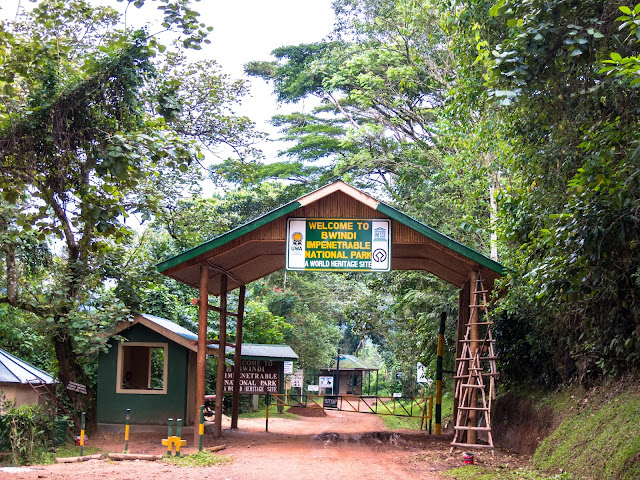 The gorilla group we are going to track is called Habinyanja, a huge family with 18+ members living on the other side of the national park headquarters. David informs us that a group of rangers has already been sent ahead to locate the gorilla family in the forest—with a bit of luck, the hike won't take too long.

We swiftly get into our vehicles and an approximately one-hour drive later, we hit the trail. The hike to reach the rainforest starts with a gradual climb through open fields. 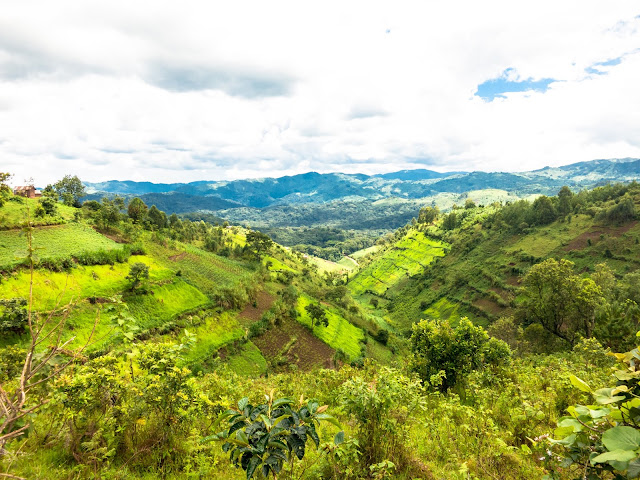 The surroundings are gorgeous; with volcanic peaks in the distance, farmland and occasional houses along the way, all shades of green envelops us. 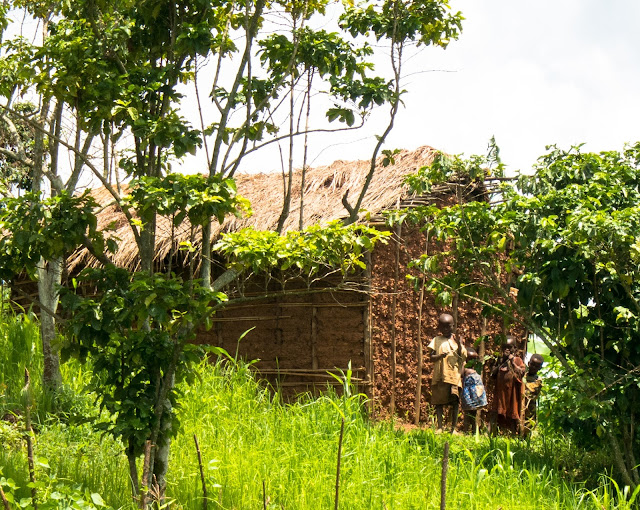 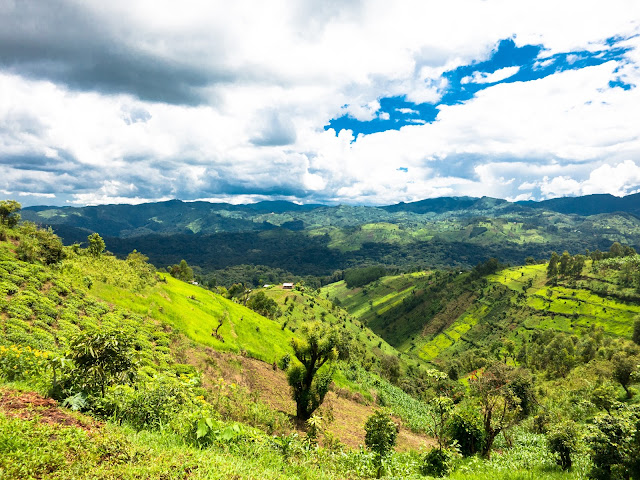 Some 30 minutes leisurely walk later, a voice through David's walkie-talkie breaks the silence: One of the rangers has located a couple of females nearby! Tingling with an instant sense of expectation, we hurry through a labyrinth of ferns and trees.

A final briefing reminds us to remain 7 meters away from gorillas, and no matter what, not to lose our nerves. The most frequently reiterated rule is to stay still and look away in case they get uncomfortable.

With our first sighting of a female gorilla eventually, the clock starts to tick down in Bwindi’s rainforest. 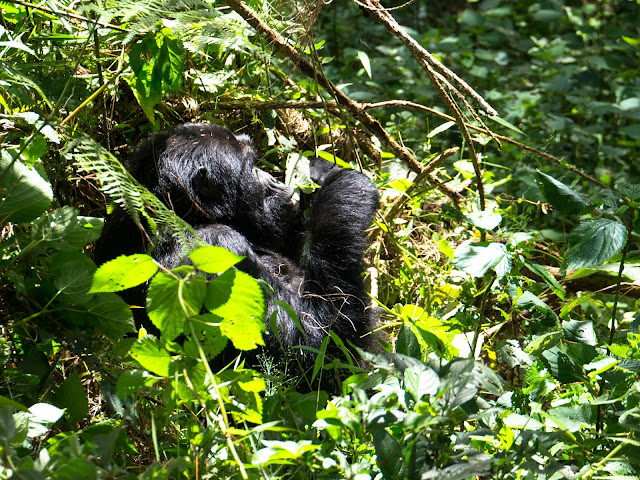 Unlike in the movies, there is no chest beating. In fact, quite the opposite: We stand mere meters from these massive animals and they calmly allow us into their world. No barriers, no binoculars, no safari vehicles, just humans and gorillas together in the forest. 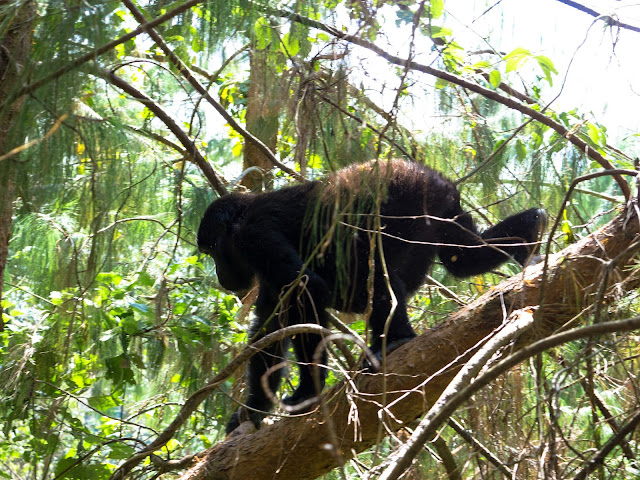 As they move downhill through the thick, wet, green vegetation, we follow them in silence —with the exception of the crisp sound of our guide's machete forging a route through the damp undergrowth. 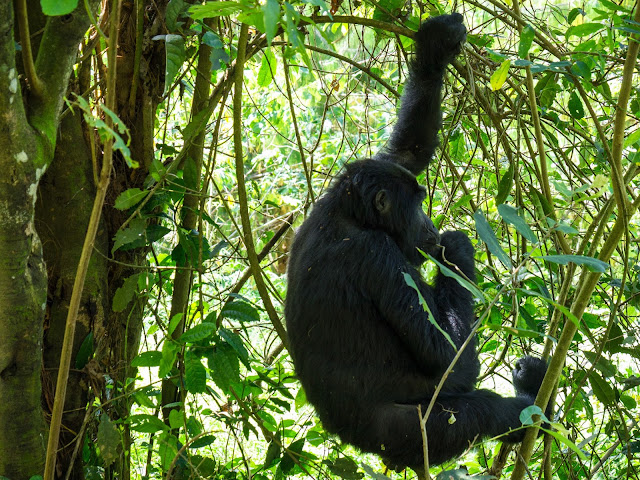 The foliage is so dense and animals move so fast that makes it hard to photograph them. 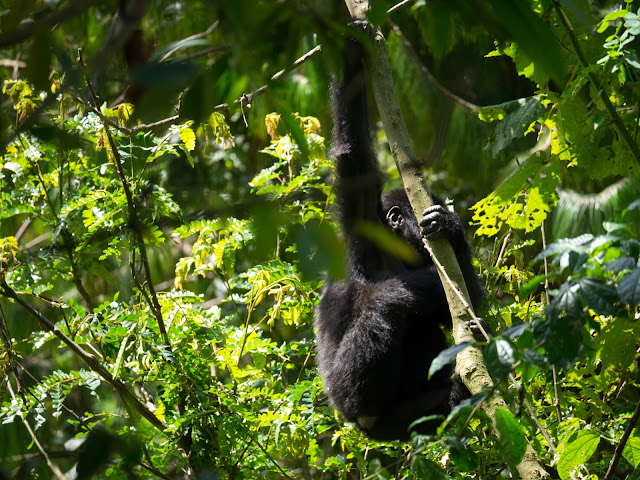 Muddy and sweaty, we continue following our guide in silence.

And there he is, the silverback, the undisputed leader of each group of mountain gorillas! So relaxed, munching on a tender shoot, he gives an indifferent look over his shoulder. 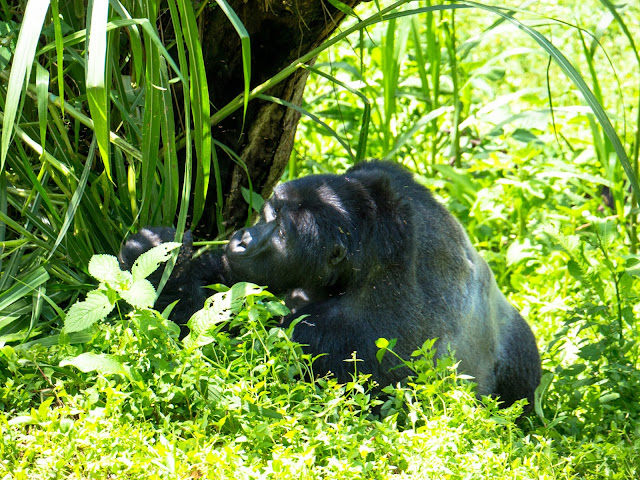 Slightly further back, a baby, wide-eyed and innocent, enjoys a piggyback ride on mum's back. 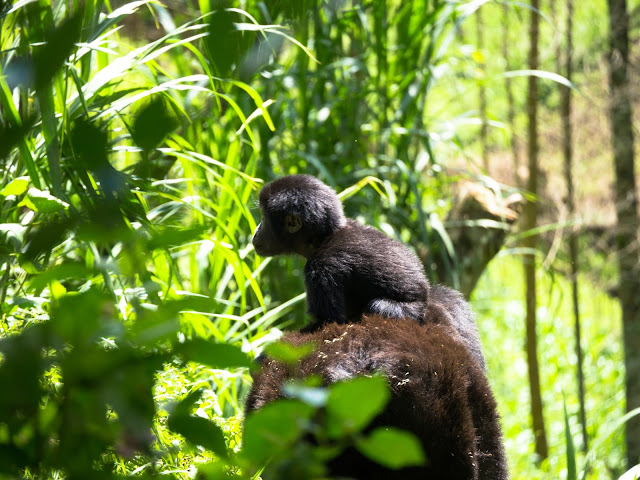 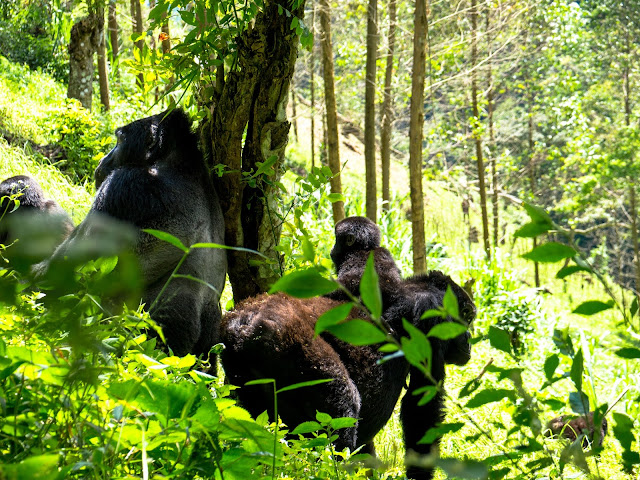 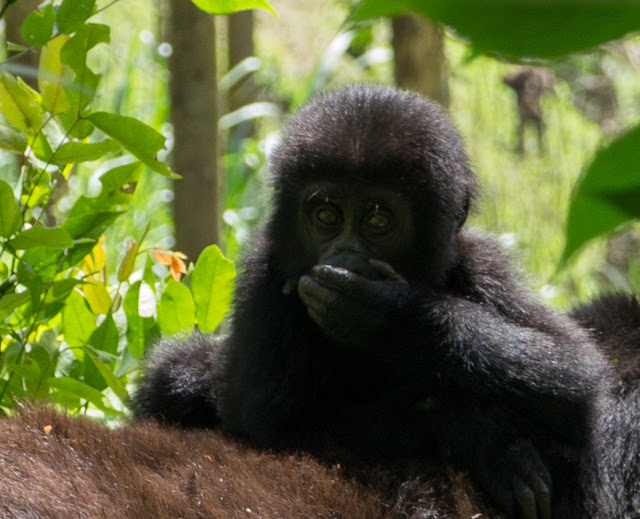 An intimate family scene under the protective gaze of the silverback patriarch. His strength shines through massive hands and nails covered with thick black fur. 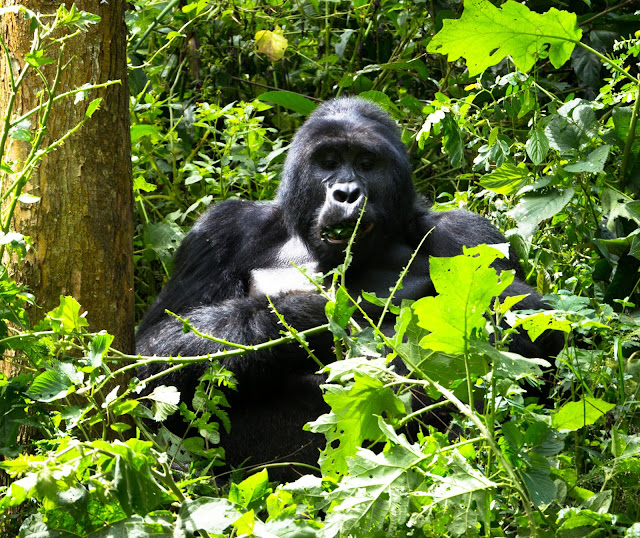 With our deepest respect and admiration, we keep observing the family governed by the oldest male. 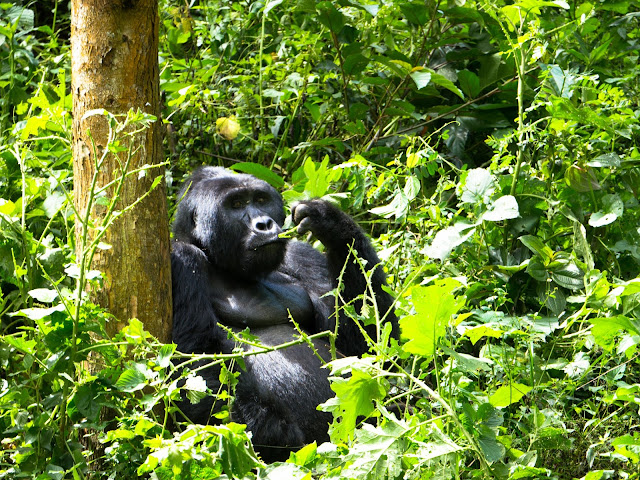 And all of a sudden, the silverback decides to reinforce his mighty power and runs across our path only centimeters away! Somebody obviously forgot to tell him to remain 7 meters away from us! 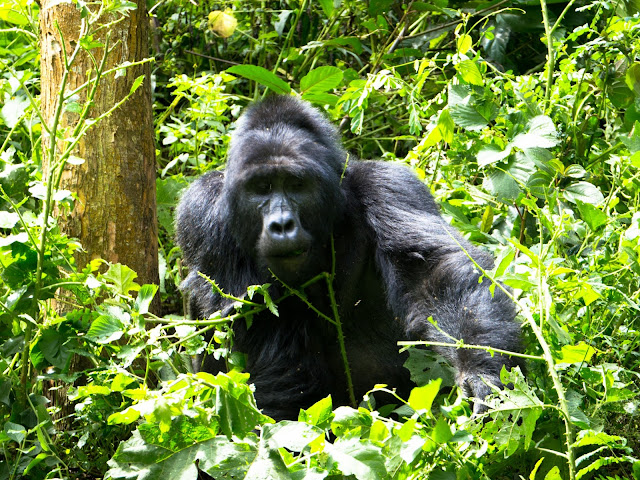 Even our guides and armed (!) rangers are visibly shaken that they instantly jump a huge step back.

Thank you, Silverback, we all know very well who's the boss! 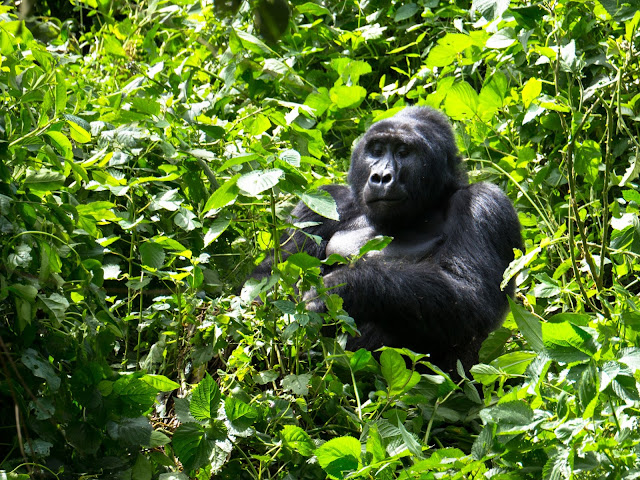 Nerve-wracking Silverback reassured, the family keeps moving further down, and we follow behind—inevitably butt-sliding at times. 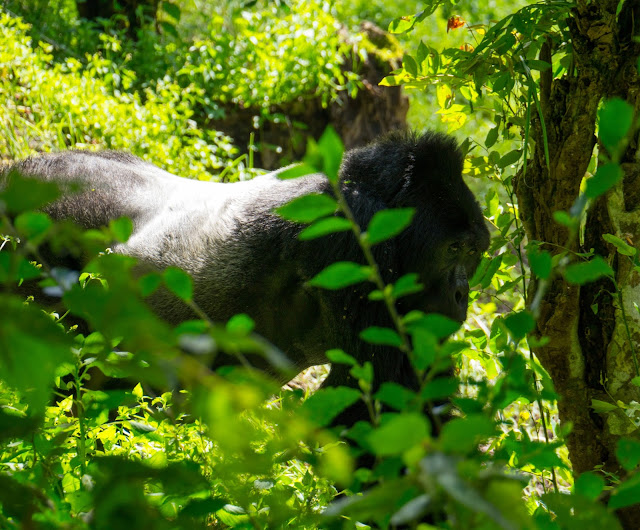 After exactly 60 minutes among these gentle giants, David whispers: Time is up; take your last shots and let's slowly climb back up.

I'd not go as far to say that it was the greatest hour of my life, but animal encounters in East Africa wouldn't have been complete without tracking the mountain gorillas in Uganda. After all, there are only few more impressive, awe-inspiring and intimidating sights than a 200 kg silverback running around you, literally a hair's breadth away from your face. 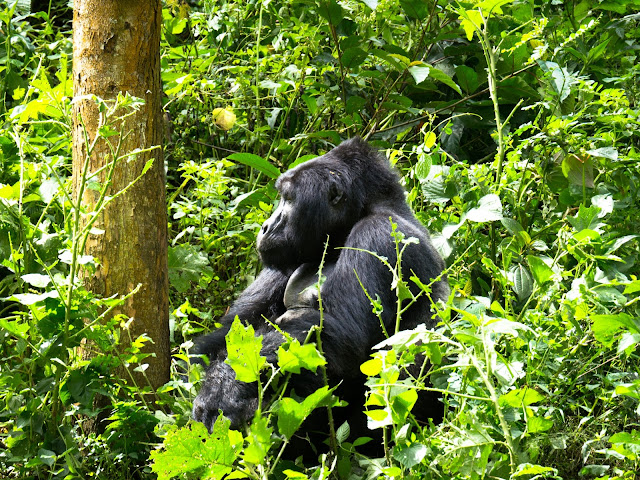 Back in the park headquarters, David hands out our certificates and charmingly asks to display them with pride so that our friends and families would know about this one-of-a-kind encounter in Uganda's misty rainforests. 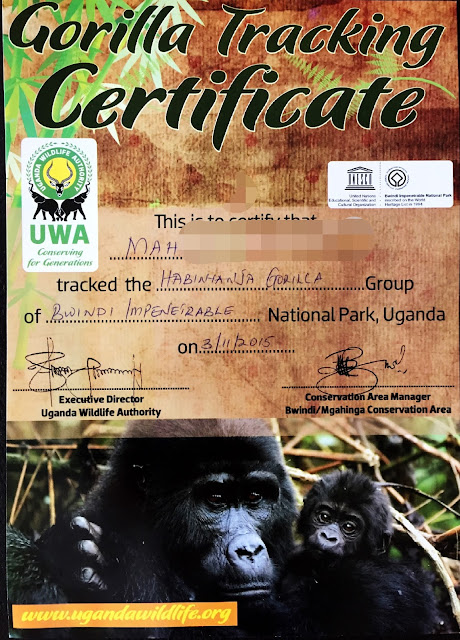 And in no time, the mist that has been hanging in the air all morning pours down, as if to emphasize collaboration for the sustainability of Africa's precious giants. 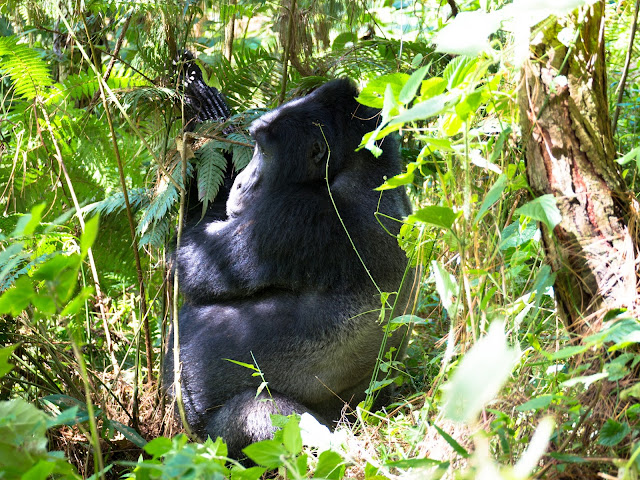 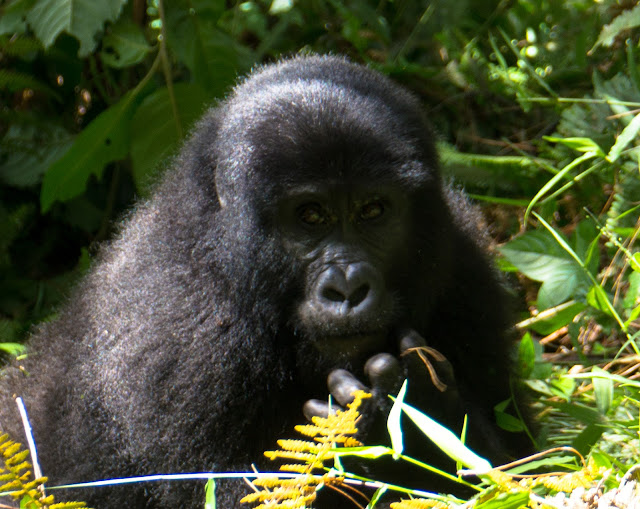 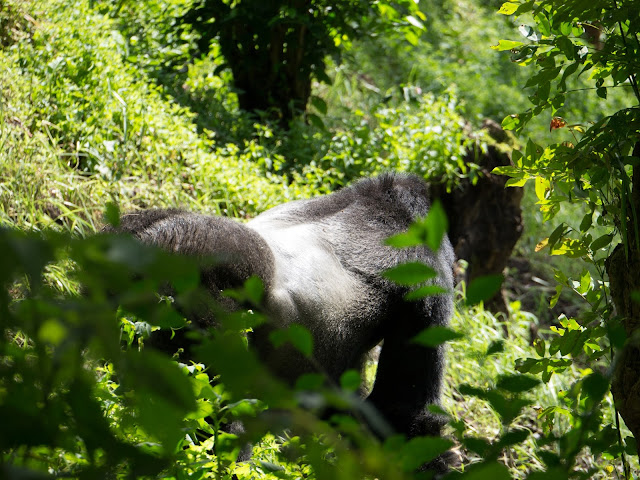