Following the Footprints of Irish and Scottish Giants 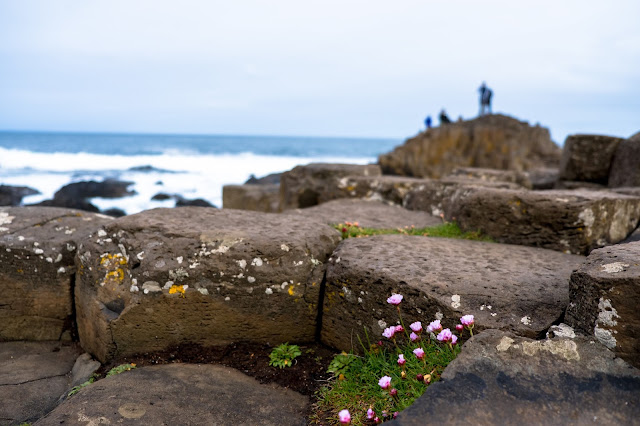 Directly across the sea, off the coast of Scotland, the air is filled with the penetrating calls of seagulls and puffins, the smell of fish and salt on the forbidding Isle of Staffa that looms tall over the ocean. 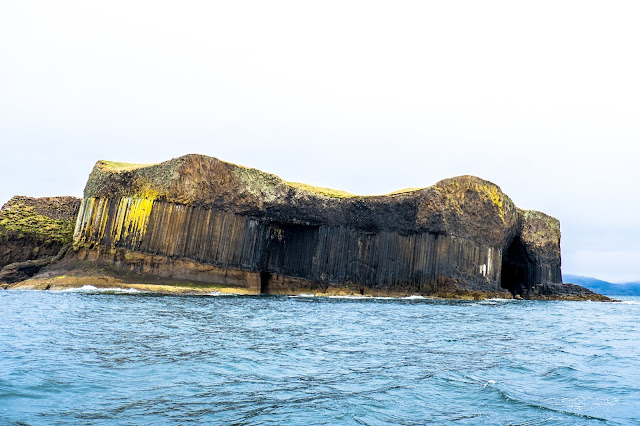 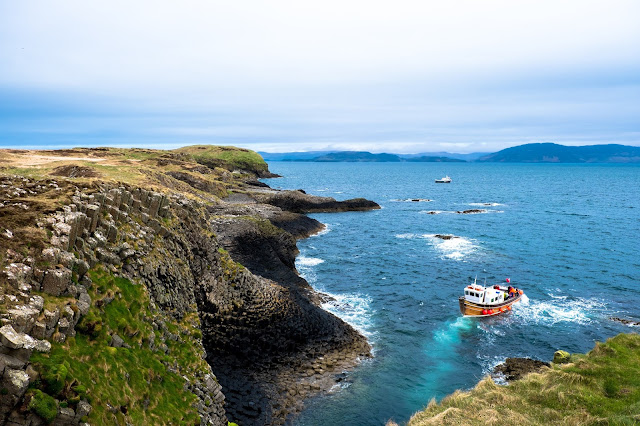 It never ceases to amaze me how Mother Nature ingeniously fills its stage with so many geologic wonders, from otherworldly 'Fairy Chimneys' of Cappadocia in Turkey to the astonishing volcanic caldera of Ngorongoro Crater in Tanzania, to this giant underwater sinkhole off the coast of Belize just to name a few. Likewise shaped and sculpted over millions of years, the famous hexagonal basalt formations of Giant's Causeway in Northern Ireland and its lesser known counterpart, the basalt walls of Fingal's Cave on the Isle of Staffa in Scotland, are nothing short of a miracle. 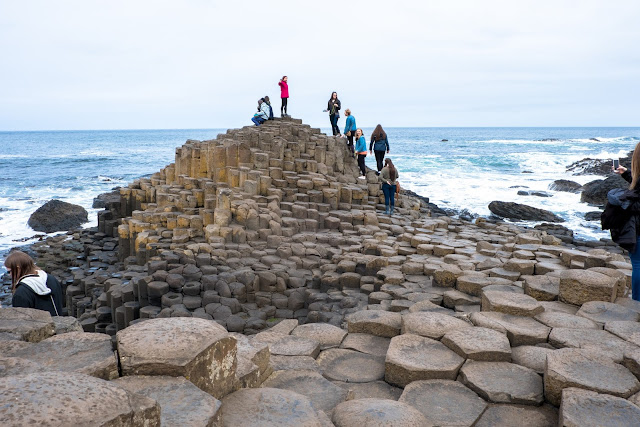 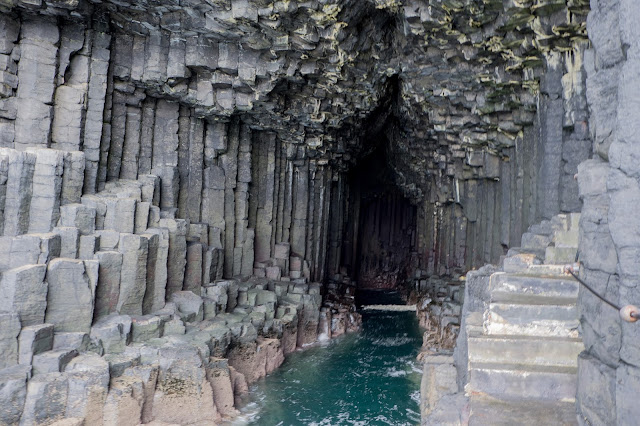 When lava repeatedly poured out and cooled as it came into contact with the sea some 50-60 million years ago, an ingenious geometric pattern emerged, forming massive hexagonal interlocked basalt columns that rise like steps, or sometimes cliffs that stretch hundreds of feet into the air.

Geologically the two sites are indeed related: both the Giant’s Causeway and the Scottish Isle of Staffa were created by the same ancient lava flow. It must have been hard to believe, though, that a violent eruption of lava many millions of years ago could result in something so symmetrical. That's possibly why the Giant's Causeway takes its name from the legends of Irish giant Finn McCool (also known as Fionn mac Cumhaill) and his Scottish giant rival Benandonner. The legend explains the columns as being remains of a huge bridge built by the Irish giant Finn McCool. 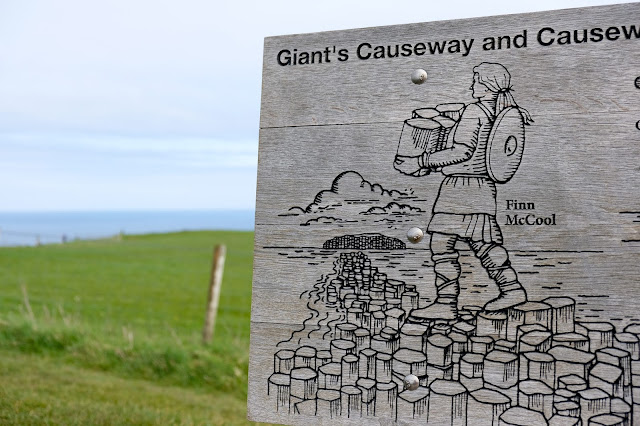 An enraged Finn tears chunks of rocks off the nearby cliffs and throws them into the sea, forming a path for him to follow and teach Benandonner a lesson. When he makes his way across the causeway to Benandonner's lair, Finn realizes that he is much bigger and stronger than himself, and he wisely makes a hasty retreat, followed by the Scottish giant. Finn’s quick thinking wife Oonagh comes to his rescue and disguises him as a baby. When Benandonner sees the giant baby, he becomes worried if the baby is that big, then what size must the father be?! This time Benandonner beats a hasty retreat across the causeway, tearing it up as he goes to ensure that Finn does not follow him back to Scotland.

Myth or science? To check it out for myself, I've visited the remnants of Finn’s pathway both at the Giant’s Causeway in Northern Ireland and at Fingal’s Cave on the Island of Staffa in Scotland. And now here comes the ultimate solution to your dilemma:

Both sites are 'same same but different'! I'd not favor one over the other, but I can tell you this much: If you can allow yourself enough time to absorb the surroundings and take in all the beautiful artwork of Mother Nature, you can't go wrong with either choice. On the other hand, if only a couple of hours is all you can afford, don't bother yourself with visiting the Giant's Causeway (especially on an organized day trip). Undeniably a unique site, but don't come to see just the stones, instead, take my advice and read on.

THE IRISH END OF THE CAUSEWAY

The Giant's Causeway, Northern Ireland's most famous landmark, is not all about the 'stones', though most people come, see and leave within an hour. It's together with the stunning Causeway Coast a UNESCO World Heritage Site. The volcanic cliffs along the coast make for a truly amazing scenery decorated by furze, the yellow flower of the Irish landscape.

I highly recommend the approx. 16 km/ 10 miles coastal walk between Ballintoy and the Giant's Causeway, but if you want to shorten, you can start from the Dunseverick Castle ruins. This 7 km section of the trail is easier and you'll have the most spectacular cliff views as you approach the ancient home of a mighty giant (the other way around, you will need to leave one eye behind). Even shorter is the signposted 'Yellow Trail' starting from the visitors center area. It's about 3 km long and ends at the Hamilton Seat, marking the border of the heritage site. Trust me, you'll still be in awe of this majestic region long after you return home.

Pictures don't do it justice, but here are some impressions from our long hike last April.


THE SCOTTISH END OF THE CAUSEWAY

Across the sea, in Scotland, there exists a remote sea cave on the uninhabited volcanic island of Staffa. That cave that once served as the lair of Benandonner is today known as Fingal's Cave, the name being the Scottish form of Fionn mac Cumhaill. It's not easy to access but absolutely worth the trouble.

The cave surrounded by the hexagonally jointed basalt columns is genuinely impressive in its scale and atmosphere. The sea surges in with spectacular auditory illusions and cascades of white foam. No wonder that it was originally called ‘Uamh-Binn’ meaning ‘Cave of Melody’, and no wonder that the German composer Felix Mendelssohn was inspired by the intensity of the cave to compose a concert overture, named 'The Hebrides' (listen on Youtube). 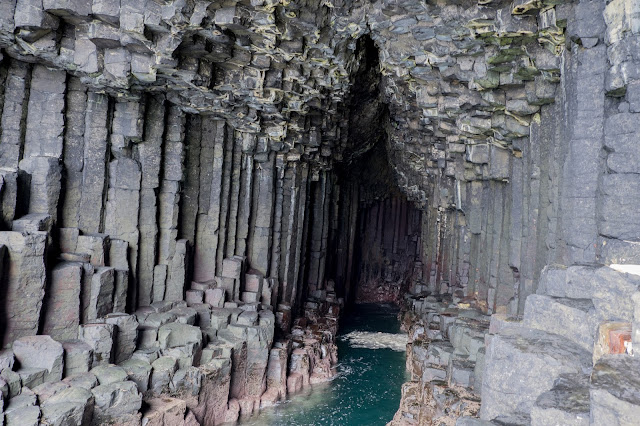 Far fewer crowds, raw nature, rich wildlife with a variety of seabirds, and if lucky seals, basking sharks, dolphins are delights that add onto the cave's uniqueness. If you are a lover of wonders, like the consummate traveler Jules Verne, it really is unmissable.

If you go, first head for the top of the island, and then enter the cave. This way you'll have all the melodies to yourself.