Ready for a somersault?

In that case, it's the sand that falls! Ever heard of it? An exact reversal of terrestrial expectations: Rivers of earth flow through the water and cascade down the vertical walls on the ocean floor. This is a rare natural phenomenon that can be observed in very few places in the world. One of those places known to me is Mauritius, and the other one is the bay of Cabo San Lucas at the very tip of the Baja California Peninsula in Mexico. 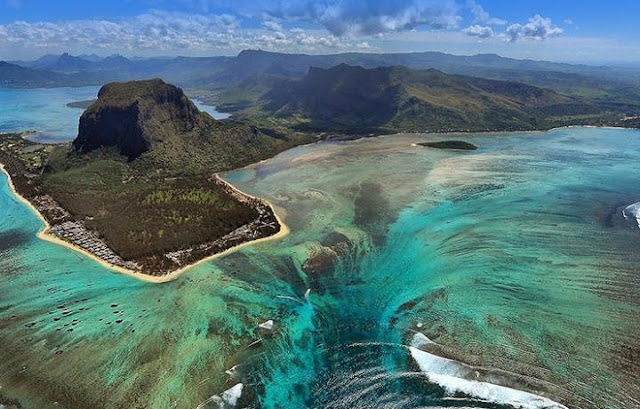 Now, the above image is from the web, depicting the one in Mauritius, where helicopter tours are available to view the phenomena from the air. To be able to experience the one in Cabo San Lucas though, you must be a certified scuba diver and dive to a depth of over 30 meters. The sights obviously won't be comparable, but mind-boggling in the least.

While Mauritius is on my list, I got the chance to observe the sand falls phenomena in Cabo San Lucas (aka Los Cabos), an incredibly beautiful place where the Pacific Ocean meets the Sea of Cortez. The sand cascades here at the so-called 'Land's End' are said to be formed by the friction between the tectonic plates of North America and the Pacific. Due to recent swells, there was no action at the largest sand falls on my diving day, thus I just did see a few tiny ones. You can't really force nature to fulfill your expectations, but I'm grateful for it being full of bizarre phenomena.

Here is another Youtube video, where the divers were obviously luckier than me.

In Cabo San Lucas, besides the undersea waterfall of sand, you can also observe an impressive array of marine biodiversity, including fish and corals of all shapes and colors. Once you submerge your head underwater, you'll easily see why Jacques Cousteau famously called this tropical marine forest "the world's aquarium", and your mind will eventually perform a perfect somersault.