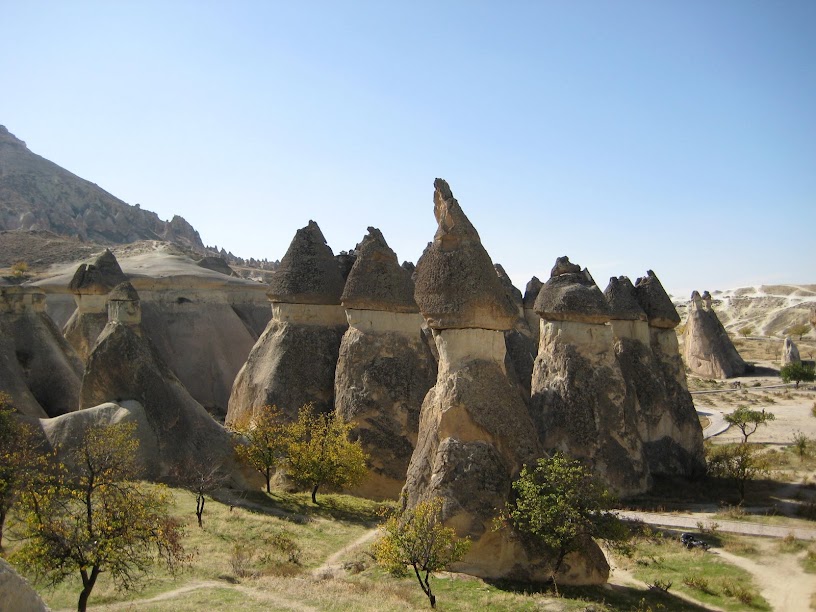 Located in the Central Anatolia region of Turkey, Cappadocia with its surreal formations can easily let you think that you were on another planet. The extraordinary formations are also home to historical ruins and to a colorful cultural heritage, hence a UNESCO World Heritage Site since 1985. With its unique rock formations, engineering marvel underground cities, rock-cut churches, other-worldly landscapes, valleys offering amazing walking trails, Cappadocia is one of those rare places that you must experience once in a lifetime, and a must-see destination in Turkey. Not surprisingly, Cappadocia has long been one of my favorite destinations in Turkey: having visited several times already, I could still visit again and again, it is simply a spectacular place. 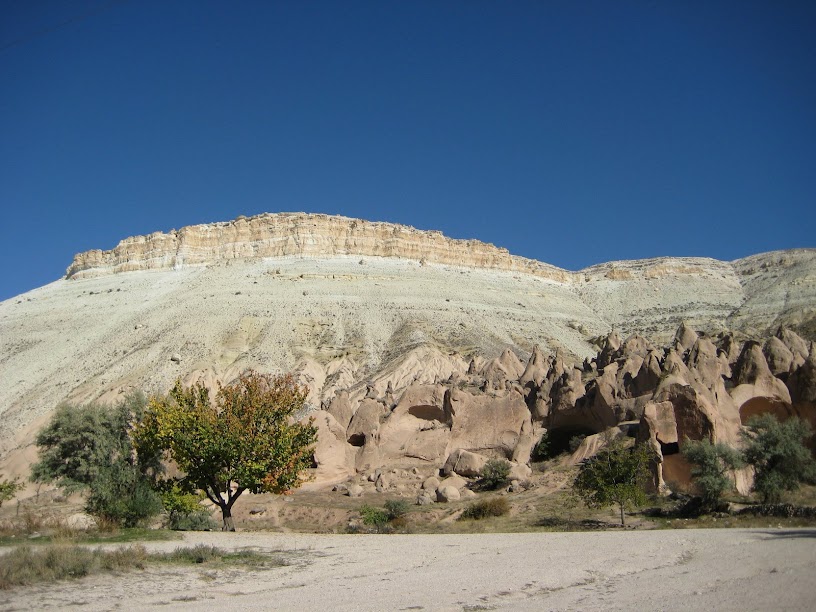 Turkey is a vast country, where you would probably need months to cover all the major attractions: from world class beaches to the cosmopolitan city of Istanbul, from green lush mountainous north to the less visited east, and to the hidden treasures of Central Anatolia such as the ancient capital of Hattusa or the lunar-like landscapes of Cappadocia... It seems to me that Cappadocia is still in the shadows of the beaches, as a result less tourists make the effort to get there. In fact, it is not that difficult at all to get to the region. From Antalya, Istanbul or Izmir a short flight would already bring you to this unique place. Listen closely, you will not regret spending a few days here, so please make the effort, the beaches will not run away... 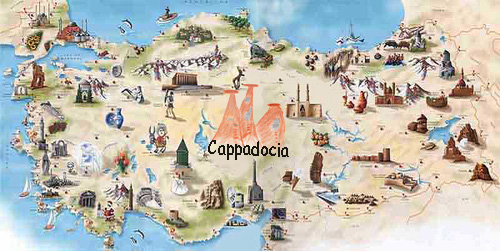 To be able to visit the area without rush, you should ideally reserve 4 days, but with a well-planned 2 days, you can also cover all the major impressive sites. The first day could be dedicated to Çavuşin Church, Göreme Open Air Museum, Paşabağları and Güvercinlik Valley, Zelve, Uçhisar and Ürgüp (sounds too much, but the distances between the sites are short). And for the second day, you could take a package tour to Ihlara Valley and Derinkuyu Underground City. To do all these, you don't necessarily need to rent a car. For instance, if you stay in Göreme, you could visit the Open Air Museum on foot, and for the rest of the day you could rent a bike, or quad, or you could still book any of the diverse tours offered by the endless travel agencies. You will soon realize that it is so easy to get around here. Those with more extensive time and interest could explore Avanos, Ortahisar, Soganli Valley, Haci Bektas, Göre Village, Kaymakli Underground City; visit Onyx stone fabrics and wineries, watch the sunset at Kizilcukur, or the best - treat themselves by making a balloon tour of Cappadocia.

If you are interested in Turkish culture, you could visit the "Turkish Night" (ask your hotel to arrange), which is a little bit touristy, but offers nice samples of traditional dances along with the whirling dervishes. The entrance fee includes food and unlimited drinks. I had each time -without exception- some nasty hangover affairs from those Turkish nights, so don't drink the regional wine like water! 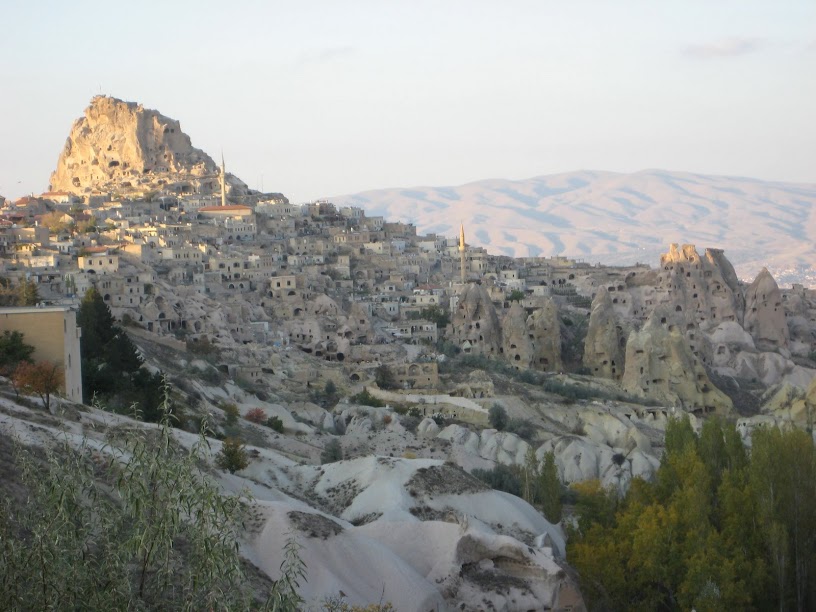 A Bit of History

In Cappadocia region, there had been three extremely active volcanoes millions of years ago. These volcanoes (Mount Erciyes, Mount Hasan and Mount Melendiz), erupted tens of thousands of years, gushing out lava and ash layer upon layer. The ashes spread over a wide area by wind, and a thick petrified layer had been formed over time. This layer is called "tuff", and according to research, the tuff layer thickness reaches 100 meters in Cappadocia today. The area's uniqueness stems from this. Although there are other places in the world located in a volcanic area, there is only one Cappadocia. As the simultaneous eruption of three volcanoes formed so thick layer of tuff, it had not been vanished by erosion over time. On the contrary, the "fairy chimneys" were sculpted by erosion within this volcanic landscape. 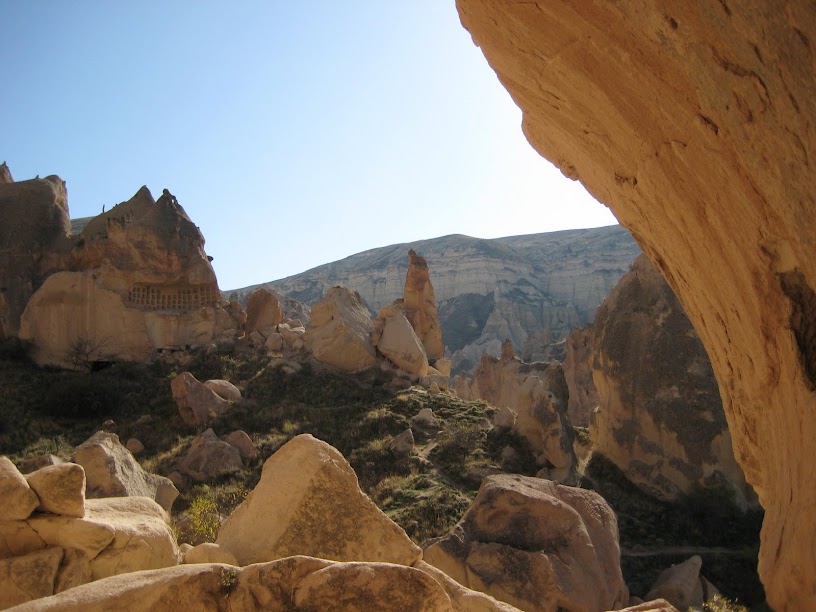 The rumor says that the word "Cappadocia" comes from the Persian word "katpatuka", meaning "Land of Beautiful Horses", and this story is being told for years. However, according to the historical research "Beautiful Horses" means something different in Persian ("huv-aspa"). It is said that the word "katpatuka" stems from the word "Khepatukh", which Hittites used for their land and existed in Anatolia long before the Persians. And that word is derived from the name of the Goddess Khepat. As a result, the true meaning of Cappadocia is "The country of the Goddess Khepat's People" (ref: Bilge Umar, Historical Names in Turkey). Furthermore, this word was modified by the Byzantine to the more phonetically Latin sounding "Cappadocia", which is adopted by the Turks and being used today.
"The Vatican of Anatolia" says some resources about Cappadocia. During the Byzantine period, the first Christians in the region escaping from Arab pressure came to Cappadocia beginning from the seventh century. They continued their worship here by hiding in the easily hollowed out tuff-rock formations; between 600 and 900 there were more than 400 churches built around Göreme alone. From 700s to 800s, the use of icons in the churches was banned by the Byzantines (Iconoclasm). Hence, more Christians came to Cappadocia and adorned the hidden churches with beautiful paintings. 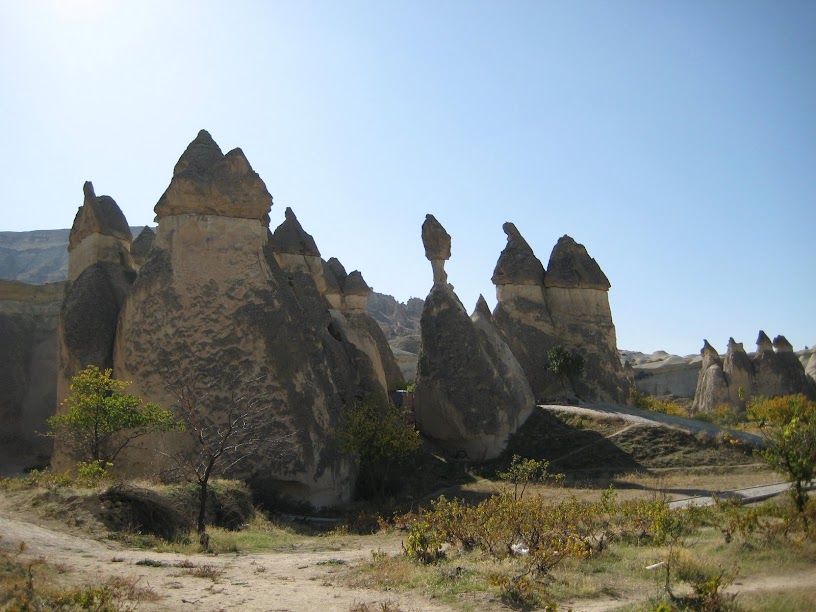 Göreme Open Air Museum with its several churches carved into the rocks of Cappadocia is one of the places where you should spend a few hours exploring. One thing you should not miss out here is the Karanlik Kilise (Dark Church), for which you need to pay an additional fee, but it is certainly worth the extra couple of bucks. It is named Dark Church, because there is only one window and very little light comes in. It is built around the end of 12th century, decorated with vibrant colors, full with amazing depicts, very well preserved, and the most impressive church in the entire region. Don't leave without seeing it. 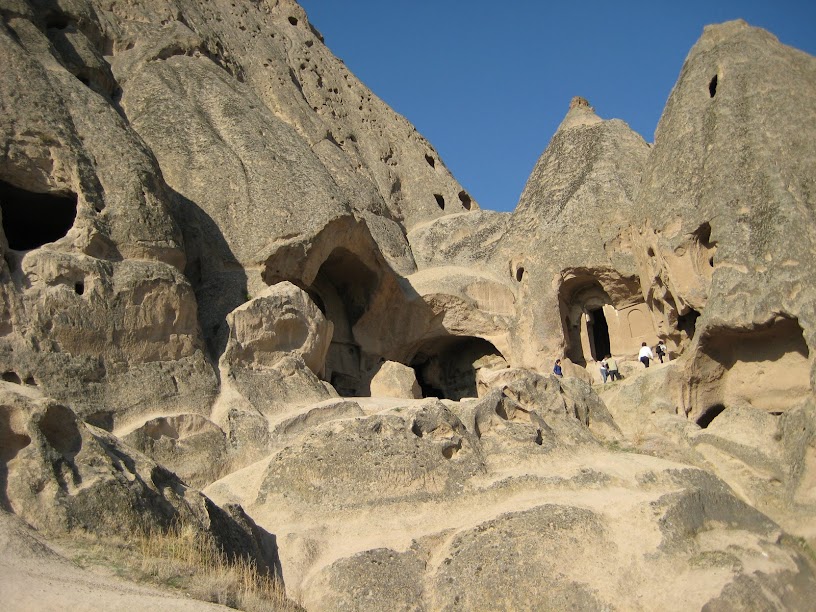 Ihlara Valley is a canyon formed by volcanic activity, measuring in length 14 km and in depth up to 150 meters. It comprises a beautiful river flowing between the trees. However, the real fame is not its natural beauty, but its many shelters, tombs and churches across the valley carved into the rocks. Since it is in a logistically good position, hidden and difficult to reach, it was a place of retreat and worship for the monks and priests. Also in wars, it had been used to hide, and to stay protected from invasions. 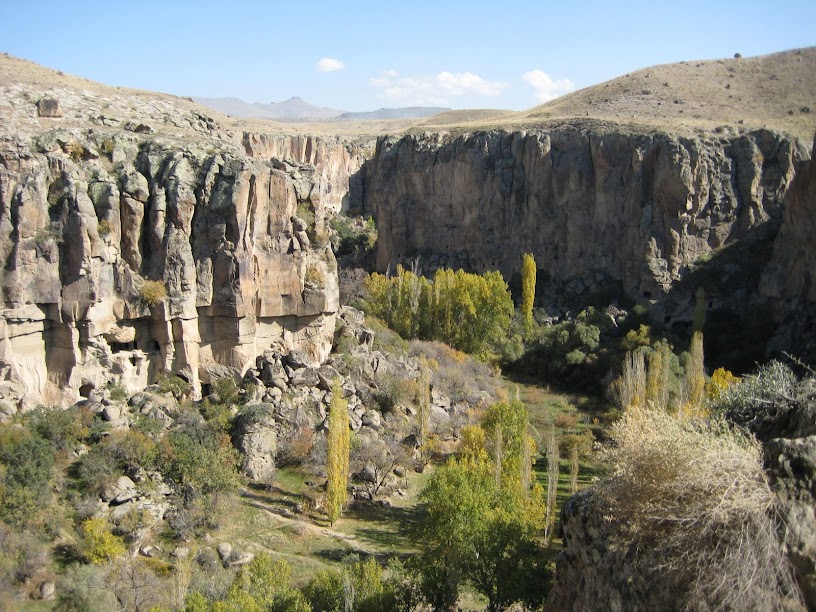 Underground City of Derinkuyu is an engineering marvel, built by the Christians digging deep under the earth. Derinkuyu is the largest of the underground cities found in Cappadocia. Through the narrow stairs, and passages like a labyrinth, one can get down to a depth of 85 meters.

It is called "city" for good reason: every need that comes to mind had been considered here: from barn to the cemetery, from church to wine cellar, from school to kitchen etc. There is even an excellent ventilation system. During invasions to ensure safety, millstone shaped rocks were used to slide close the doors and passages. Currently, only 10% of this complicated underground city is accessible, and it is no doubt that some people believe that aliens constructed it.

Zelve Open Air Museum lies 10 km away from Göreme on the Avanos road is one of the most intense valley of fairy chimneys. Zelve, until recently, used to be inhabited. Due to the danger of collapse, the people living here were moved to a new village in the 1950s. After that, Zelve became a museum. 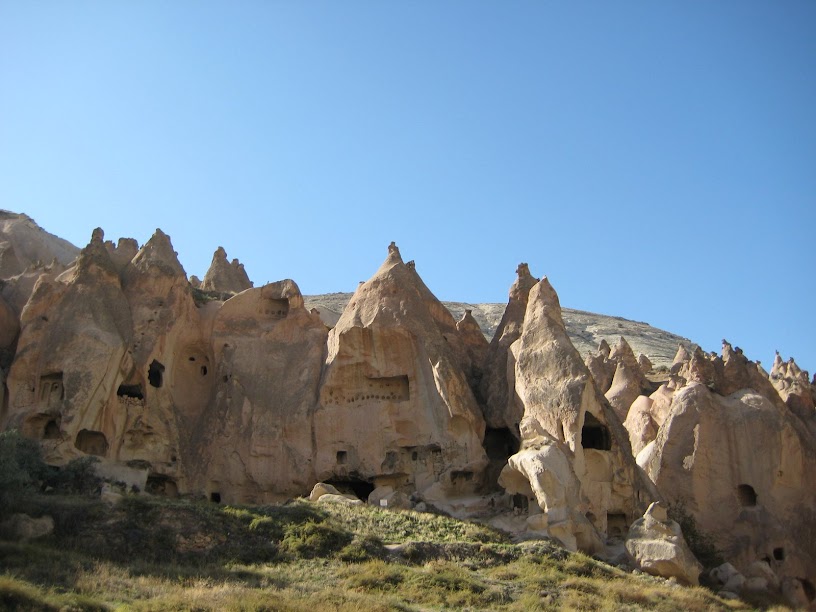 Ürgüp is home to the fairy chimneys that comes to mind first, the source of the postcard photos, the beautiful triplet.

Below you will find a selection of the accommodation options in the region, in no particular order.

Fairy Chimney  is owned by a German anthropologist and has fantastic views.
Goreme House is homey, cute, a 13 room facility. Breakfast and spectacular views.
Museum Hotel has a terrific scenery, looking down on the whole region.
Karlik Evi has a warm atmosphere and a beautiful view.
Sato Cave Hotel is a good budget option with a nice view and breakfast:

Do you have any favorite accommodation to add to the list? If so, please leave a comment.

PS:  I'm not an affiliate of any of the web sites or companies mentioned above. 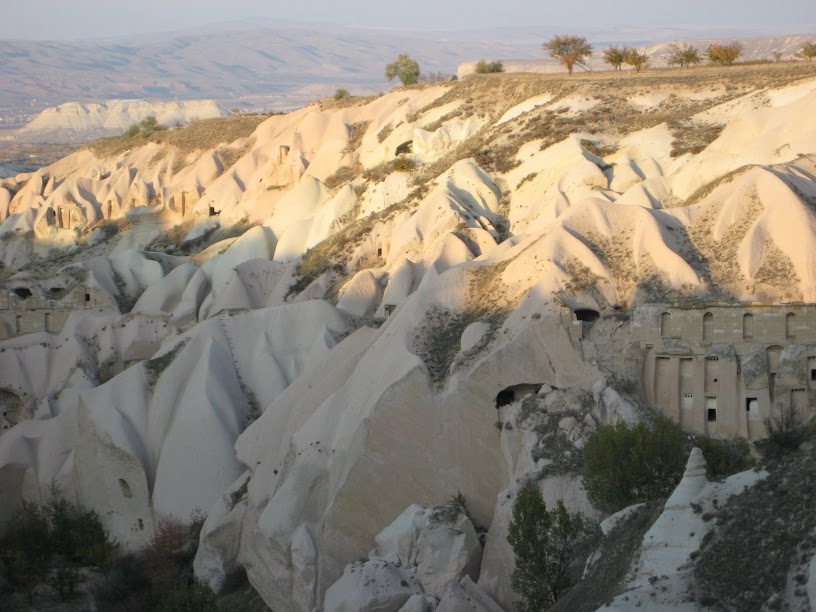 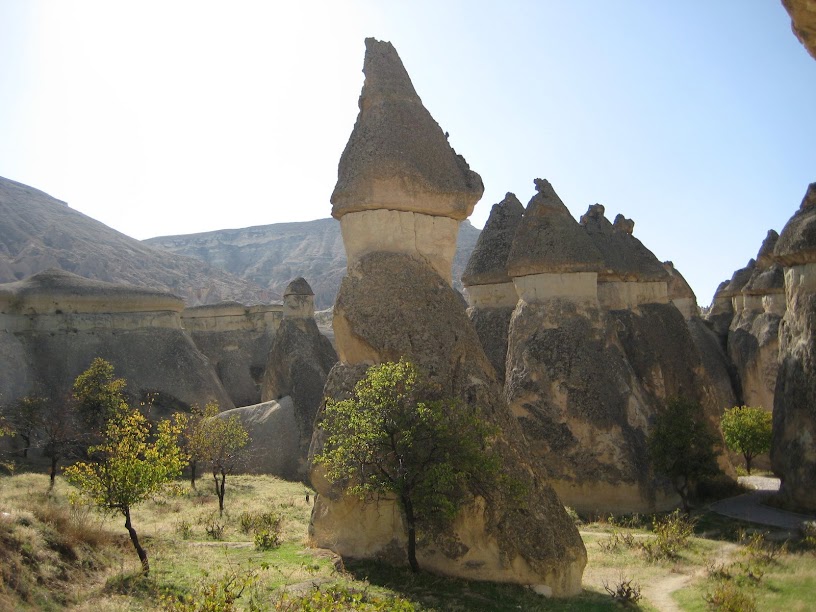 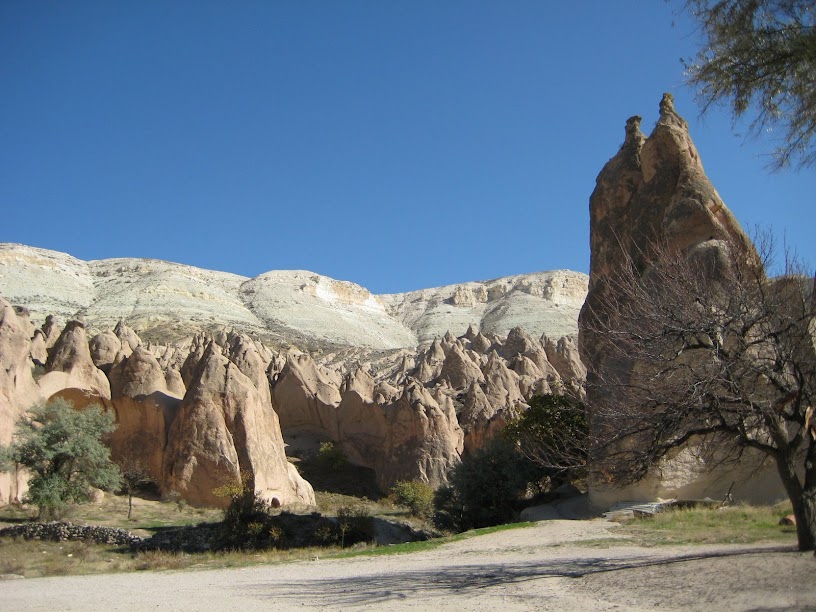 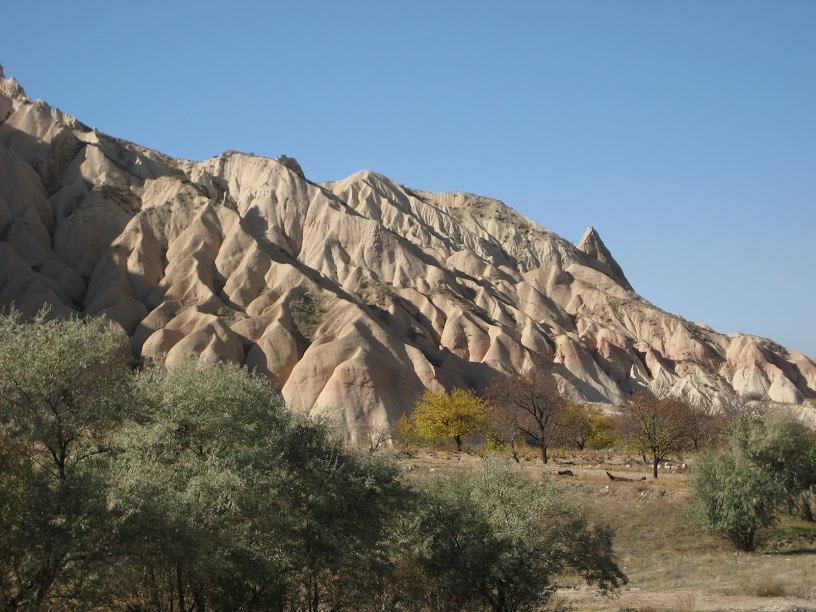 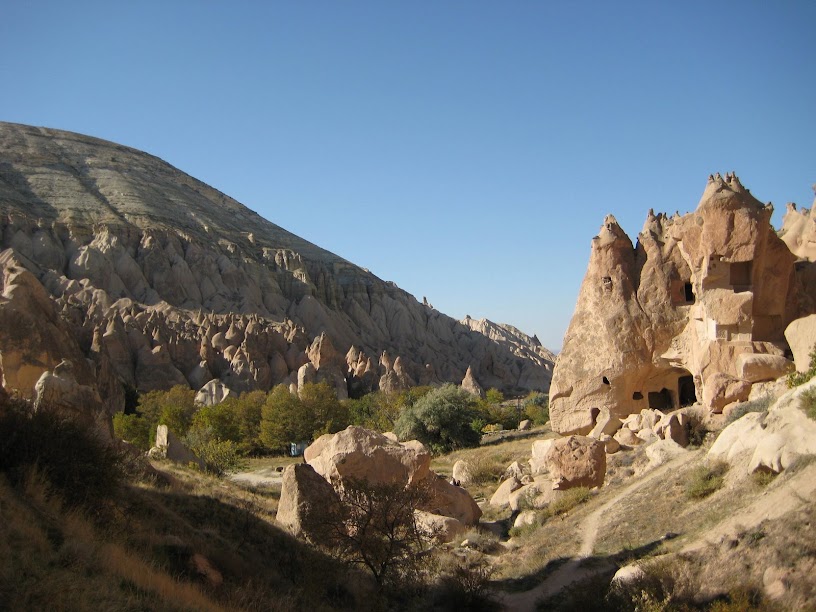 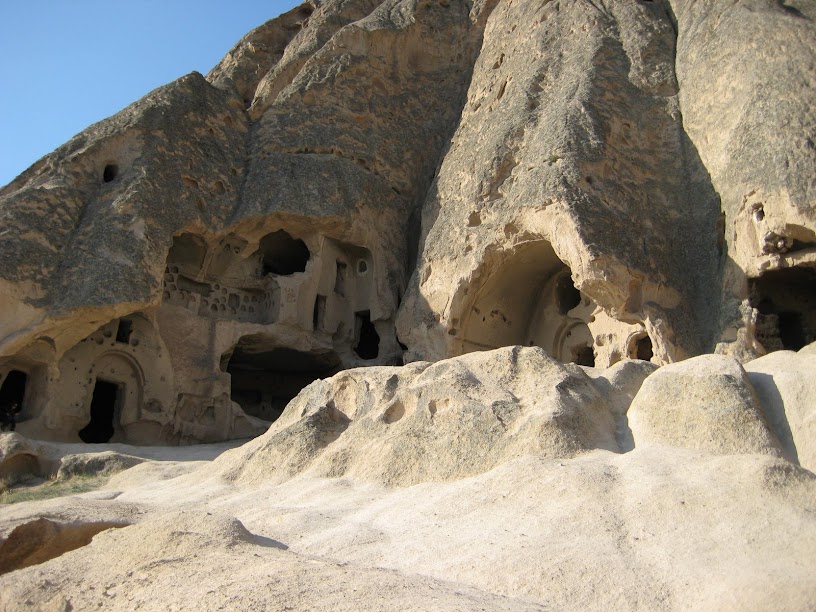