My Journey to Holy Land - Israel in a Nutshell

2/06/2016 Asia , Bethlehem , Dead Sea , Israel , Jerusalem , Palestine , Tel Aviv , Tidbits , UNESCO Edit
How familiar everything seems in this land, yet so unparalleled. Upon stepping out of the airport, you instantly feel yourself at home with a bunch of friends as if you have known each other for years.

Tel Aviv, the vibrant city with its Mediterranean climate, balmy beaches, chic cafes, art galleries and the modern skyscrapers is like a breath of fresh air and familiarity that gives you energy on the spot, and you are ready for anything. The city will surely lift your spirits. 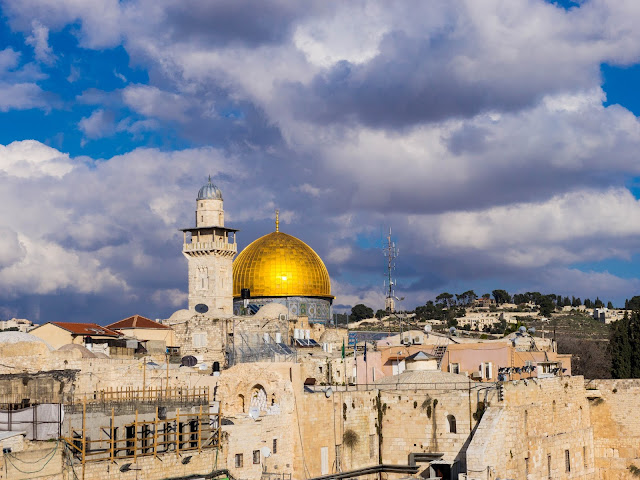 An hour further to southeast, Jerusalem, the eye-raising capital of Israel, is not only home to some of the most significant sites of the ancient world, it has also been the scene of conflict over the centuries. All wrapped together in one teeny-tiny area, the city is so intense and mind-blowing that will leave you in astonishment.
Soon you notice that you are in a land of extremes, a cultural and traditional hybrid, all packed into a very small space and any trip would be too short be able to get a full understanding. So was mine - a 10-day business trip with very limited spare time to explore and experience the country to the fullest, that offered an eye-opening glimpse nevertheless.

From neon-lights to dark corners, from modern art to ancient history, from city to desert, from one religion to another, from intense culture to untouched nature, Israel is nothing like I had ever imagined before.

Albeit not comprehensive, here is my personal list of top things to do in Israel for the first timers, in no particular order:
And finally

BE A HEDONIST IN TEL AVIV

Sadly I was not able to see this city in daylight, but every night I found myself doing something that I thoroughly enjoyed. No matter how late, I strolled through Tel Aviv's bright streets scattered with fancy malls, cafes and restaurants, and enjoyed the balmy breeze at seaside.


To be honest the city is not particularly pretty. With all the skyscrapers and busy roadways, it seems like a typical North-American city, but it is still somewhat pedestrian-friendly and small enough to walk around. At times, though, the walk may not be so pleasant due to the heavy traffic. 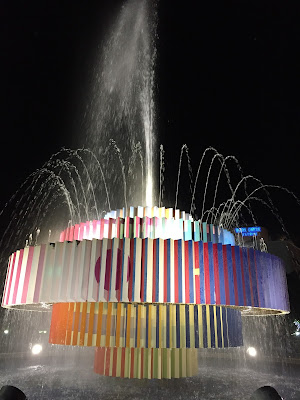 In one of those busy areas, at the center of the Dizengoff Square is the colorful Fire and Water Fountain by Israeli artist Yaacov Agam, dedicated in 1986. The construction of this rotating sound, light and water fountain took ten years, and it is considered to be one of Agam’s most famous kinetic sculptures. The mechanics of the computerized fountain allow its several functions, including turning its wheels, spraying water in various forms, spitting fire, and playing music.

“The fire and water together in the sculpture recreates the dynamic elements of time and change,” explains Ron Agam, Yaacov’s son. “The most important element of this artwork is its celebration of life, the most constant thing in life is change and everything is always in movement.”

With the constant coming and going of people here, this is a good spot for people-watching. If you are lucky, you may be able to get a seat on one of the benches surrounding the sculpture and mingle with some friendly locals.

If you are not into neon-lights and hip nightlife, Old Jaffa is the place to be where you can let your stress flow away with the soft breeze. And with some stunning views of the city and the Mediterranean Sea, soon a smile sweeps your face. 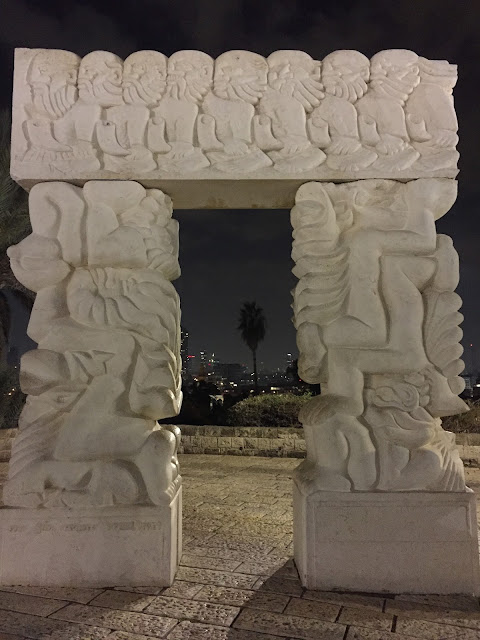 One place I can recommend going at night for breathtaking views of the city of Tel Aviv is Aladin Restaurant in Old Jaffa. The restaurant is built in a 600 year old stone building from the time of the Ottoman Empire and situated on a hillside above the sea with a spectacular panoramic view of Tel Aviv. If the weather is nice, this would be a fantastic option to spend an evening, eating fresh fish and drinking wine, and enjoying the lovely outdoor atmosphere. 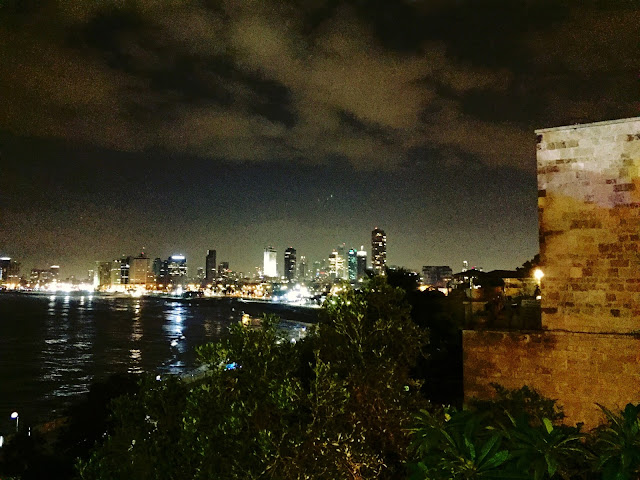 SHAKE YOUR SENSES IN JERUSALEM

Jerusalem is one of those places which has to be seen to be believed. The Old City, a UNESCO World Heritage site, is home to holy places for Jews, Christians, and Muslims, and every year visited by thousands of pilgrims and tourists alike.


Even though I felt a bit out of place in the touristy Old City, it was undeniably a unique experience on its own to come across such great religious and ethnic diversity all scrambling towards their quarters, to witness pilgrims praying in spiritual emotions, to feel the invisible walls among the Old City quarters, to notice the prejudices of one neighbour about the other - again all in a tiny area less than a square kilometer.

I am not going to list all the well-known sites here, but if you want to get off the beaten path and experience the real Jerusalem, make sure to contact Alon prior to your trip. He was the driver-guide for my trip over to Masada and the Dead Sea, but he also offers tours in Jerusalem. Alon was an Orthodox Jew until four years ago when he decided to give it up and start a new life. He is incredibly polite, open-minded and always eager to share his opinions and personal experiences in all honesty as related to religion/life, Israel and the regions of conflict. Spending some time with him as your guide will surely enhance your overall experience in this holy land. In case you want to explore the city on your own, "Jerusalem Old City Audio Walking Tours" by the Jerusalem Development Authority is a great app I can recommend.

FACE THE COLD REALITY IN BETHLEHEM

Bethlehem is just a short drive (some 10 km) away from Jerusalem, but it is in a whole other world. Located in an "Area A" zone administered by the Palestinian Authority within the West Bank, Bethlehem is primarily known for the birthplace of Jesus (The Church of the Nativity). All the holy sites aside, for me this short drive was a reality check with unbelievably many mind-boggling impressions that I strongly recommend anyone visiting Jerusalem a side trip to Bethlehem or any other town in Palestine to do their own reality check.

Visiting the West Bank of the Palestinian Territories is very safe and easy for tourists, though Palestine's border is complex as ABC. 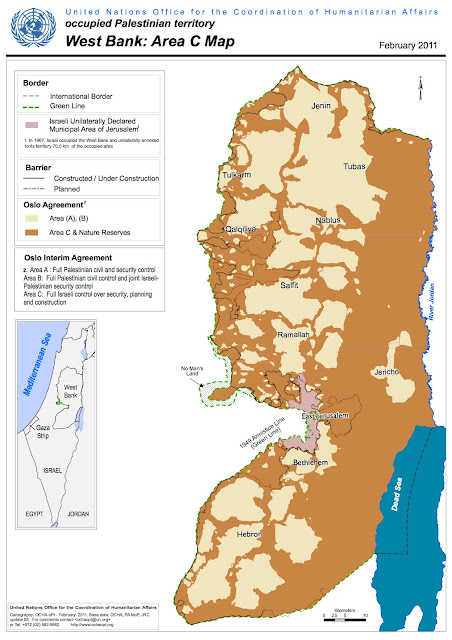 The West Bank is divided into pockets of land categorized into three zones: Zone A, B, and C.

The land in Zone A, which makes up only two to three percent of the geographic area is entirely under the control of the Palestinian Authority.

Zone B is administered by the Palestinian Civil Authority but the security is mostly controlled by the Israeli military. In case of trouble in any island of Zone A, that community can be locked down by Israeli troops by shutting down Area B. Hence, the majority of the Palestinian population could easily be isolated in urban islands throughout the West Bank.

Zone C, holding most of the West Bank's uninhabited land, is under complete Israeli authority.

Entering the Zone A is forbidden for Israeli civilians, whereas there can be no Palestinian building in Zone C without a permit from the Israeli Civil Administration. Israel and Palestine relationships are complicated but tourists are free to travel in and out.

An Israeli checkpoint stands between Jerusalem and Bethlehem, and a passport is normally required to reenter Israel. However, during my visit checkpoints seemed relaxed and no one asked for my passport. While I felt very safe throughout my visit to Bethlehem, obviously trouble does break out from time to time. So it’s wise to follow the situation closely prior to arriving in Palestine.

EMBRACE THE HISTORY AND NATURE AT MASADA

Masada, the ancient tragic fortress in the sky, is a spellbinding place that combines history with natural beauty, Built by Herod the Great high above the Judean desert, this mountaintop fortress was the site of the Jews’ last stand against the Roman Army in 73 AD. Nearly 1000 Jews chose suicide over death or enslavement by a Roman legion, according to some historians. According to others the truth is less romantic, however, either way Masada is an impressive isolated mesa rising 1,424 feet/434 meters up from the Dead Sea. 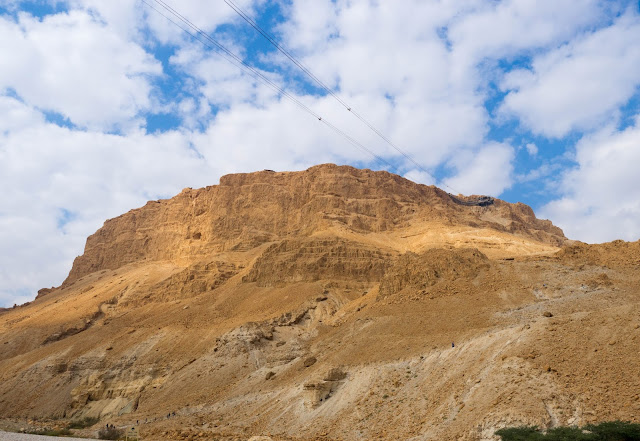 You can ascend the ancient walls of Masada, not surprisingly a UNESCO World Heritage site, by cable car, or you can take the "snake" path. For the snake path you should plan 45 minutes each way.

The ancient ruins at the top are very well preserved and the views from here are off the charts. 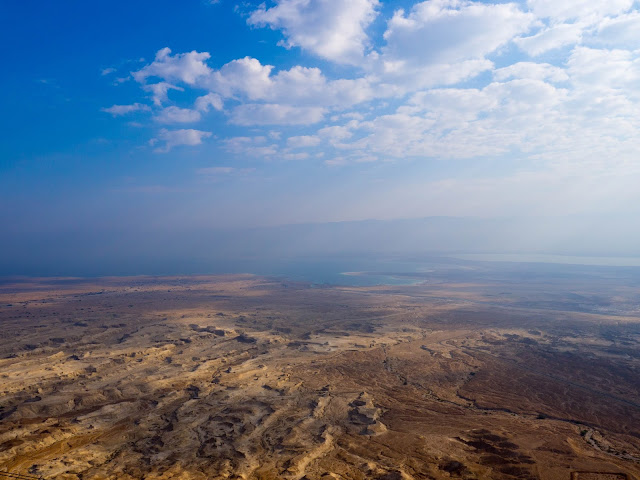 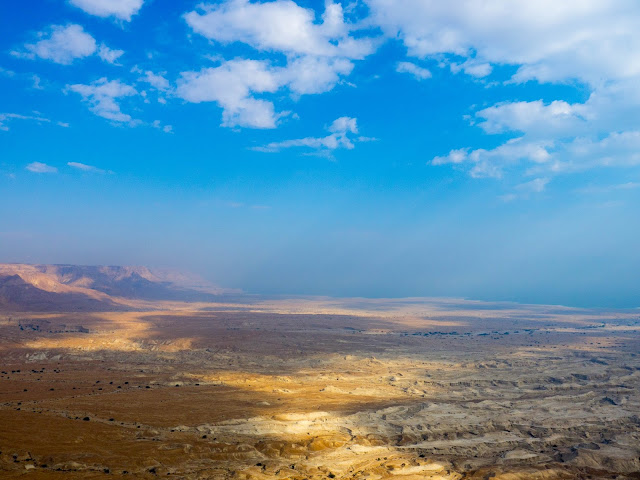 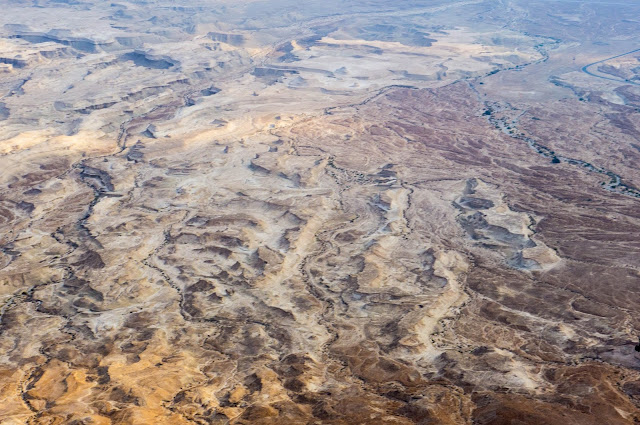 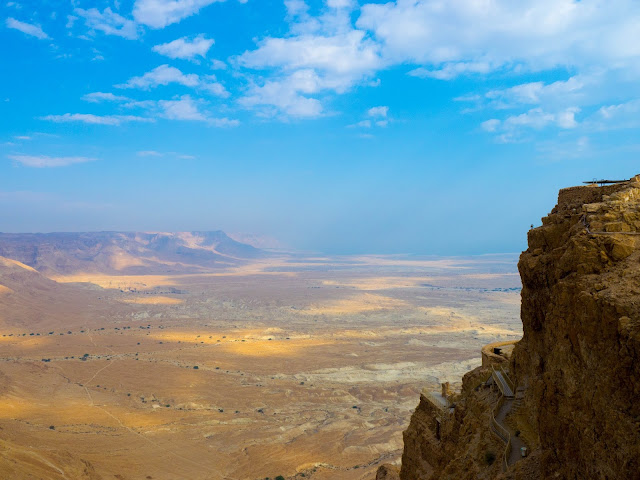 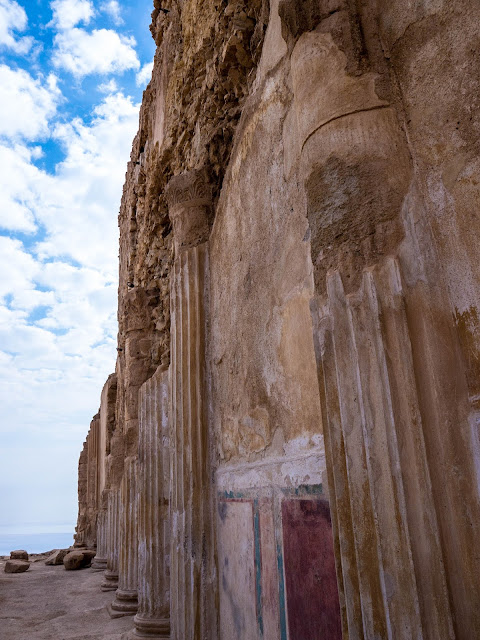 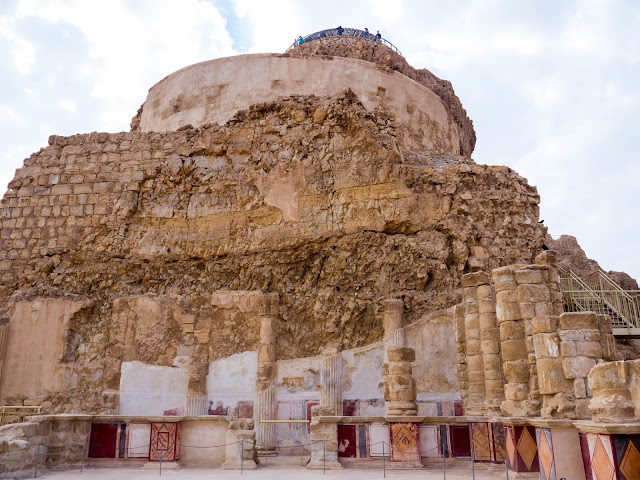 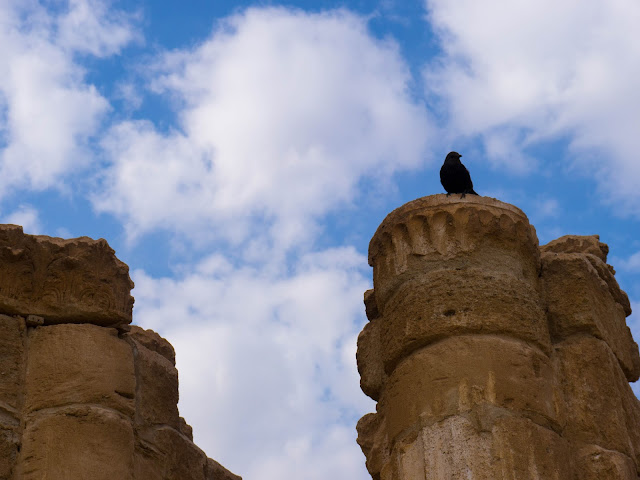 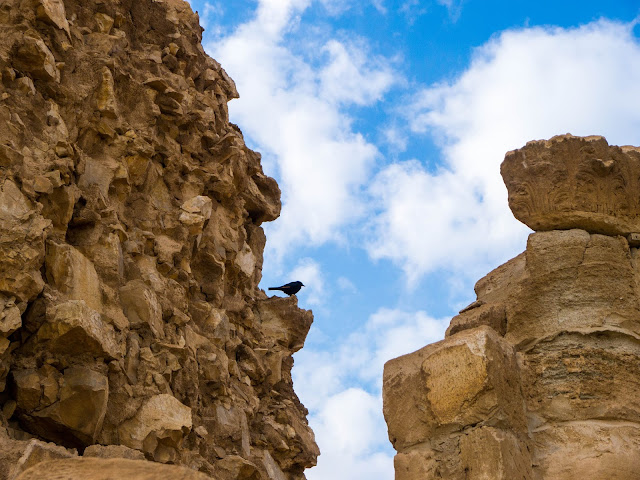 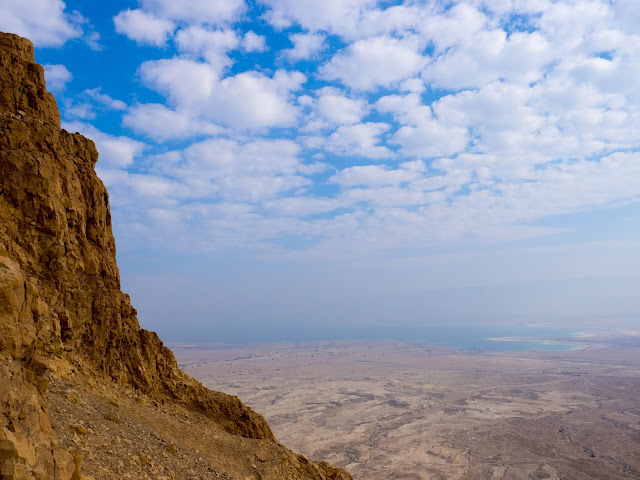 COOL OFF AT THE DESERT OASIS EIN GEDI

In the desert near the Dead Sea, you come across a playground with pools of cool water, tiny waterfalls and warm rocks to lie on, namely the Ein Gedi Nature Reserve. Don't expect to see anything like Niagara Falls or whatsoever, though. The contrast between the desert and this watering hole is the clou here in Ein Gedi, the name meaning 'the fountain of the kid', where‘kid' being the young offspring of either a goat or an ibex,

While not necessarily a must-see destination for first timers, you may want to spend couple of hours here, especially on a hot summer day.

Ein Gedi Nature Reserve (not to mix up with the same-named spa!) was part of the tour I booked through my hostel. The tour operator was Abraham Tours, and absolutely recommendable.

GET HEALED IN THE DEAD SEA

The Dead Sea, a hyper-saline lake 400 meters below sea level, is the lowest elevation on dry land and is truly one of Earth’s unique places. 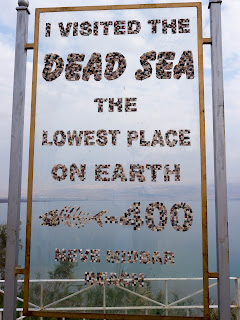 Floating in the tranquil, healing waters of the Dead Sea effortlessly, immersing yourself in its therapeutic mineral-rich mud, and enjoying the view of the mountains in the distance, on the Jordanian side is another must-do activity when in Israel.


The water of the Dead Sea has a salt content of 33.7 %, compared to 4% in the oceans! The salinity is so high that the water tastes no longer salty but bitter. Simply licking your finger for a second would be sufficient to make a wry face for minutes. So, don't take a sip or dip here, and be careful not to get any water into your eyes, nose and mouth.

As much fun as the Dead Sea offers, a great pity it is receding: the waters in the Dead Sea are vanishing at a rate of more than one meter every year. Without the Dead Sea waters to protect the salt layer beneath the soil, the salt is being dissolved by the fresh water from rain or desert floods, creating hundreds of new sinkholes every year. A bitter truth that already forced the closure of some popular beaches,  and the rate is expected to rise because the Dead Sea's natural water sources have been diverted for farming and drinking water. So don't wait and go now before this unique place gets swallowed!


Tip: if you are ready to fork out a small fortune, you can scuba dive in the Dead Sea with Dead Sea Divers! 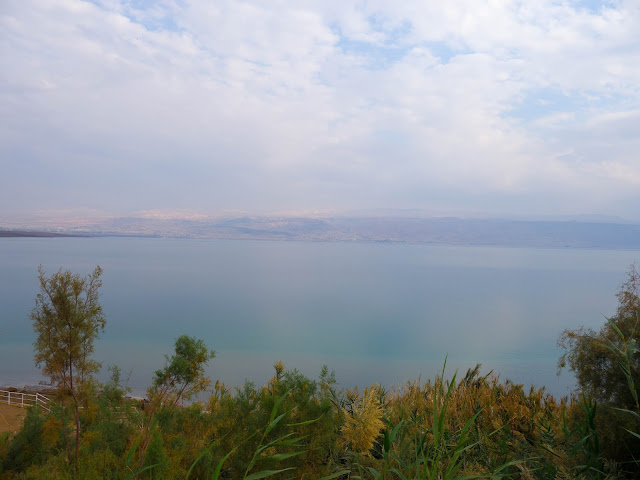 Is Israel safe to visit? In my experience, yes. I had no safety concerns at all during my entire stay. I spent most of my free time wandering around in the dark alone, not only in Tel Aviv but also in Jerusalem, and I felt comfortable at all times. Apart from the long security checks at the airport, I found Israel and its people extremely pleasant.

Forget about the perception you gained through the media, trust yourself, keep a healthy level of suspicion and enjoy all that this fascinating country has to offer. Safe travels! 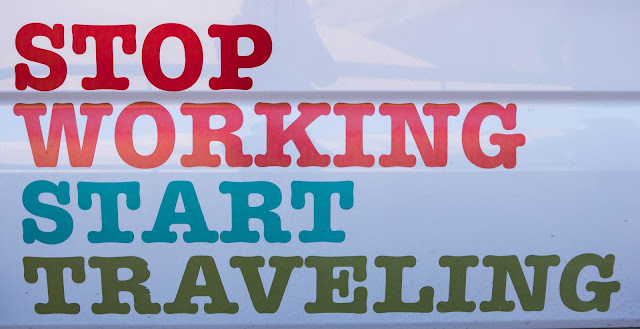