My Munich 3 - A Spooky Summer Night in Munich

7/17/2017 Europe , Germany , Munich , My Munich Edit
Heading to Munich soon and want to make sure you hit up all the must see attractions? I'll be honest with you, irregular reader, that you won't find the quintessential guide to Munich in this post. I'll rather be revealing some of the city's most overlooked peculiarities. Curious? Then let me guide you along part of Munich's Old Town, taking in some of the city’s most famous buildings and haunted highlights.


Any visitor to Munich will inevitably meander around the Old Town that is still accessed through the mighty city gates. The Karlstor at Karlsplatz (Stachus) marks the western border of the pedestrian zone. Heading towards Marienplatz, you will pass by department stores, museums, Frauenkirche (Church of Our Lady) with its onion twin domes, cafés, restaurants, fountains, skulls, dragons...don't rub your eyes, you got it right! 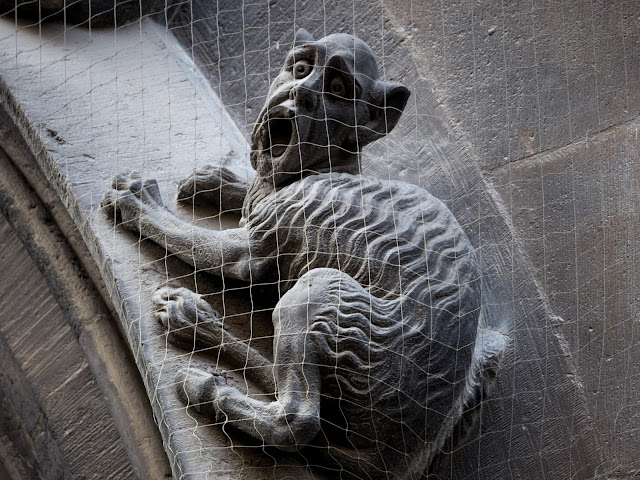 It haunts between department stores and pedestrian streets that you encounter quirky figures at fountains, house corners, church walls...basically at every turn, ghostly figures accompany you.

The dark side of the Bavarian metropolis awakens to the blue hour providing the best photo opportunities. Now adjust your eyes to the twilight and keep them wide open. We'll join the crowd in Marienplatz first and continue from there.

The world famous Glockenspiel (carillon),  is not all you’ll find in Marienplatz, the true heart of Munich.
It's actually the intricate tower of the New Town Hall (Neues Rathaus) that houses the Glockenspiel. The impressive neo-gothic office building (1867-1908), also home to the city council, offices of the mayors and part of the city administration, deserves a closer look. Walk around the building, focus on overseen aspects of it, and then enter the courtyard where you can enjoy(!) a drink in quirky company. 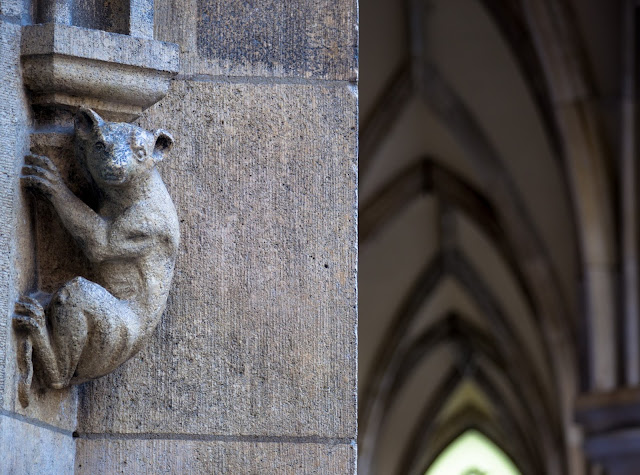 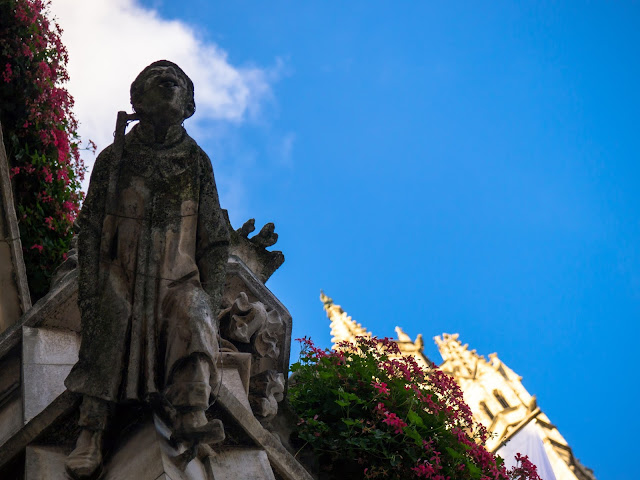 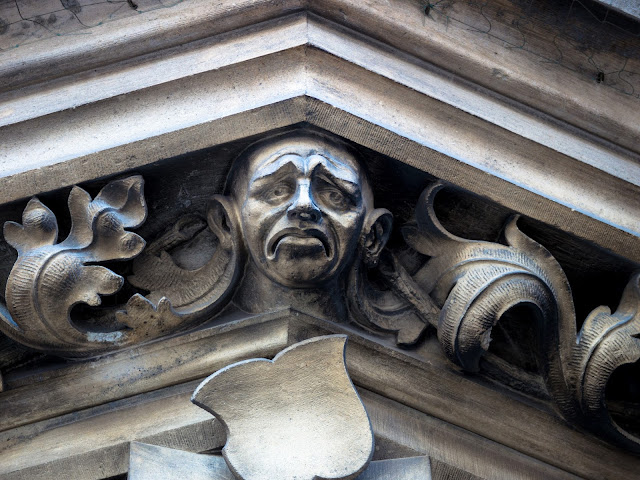 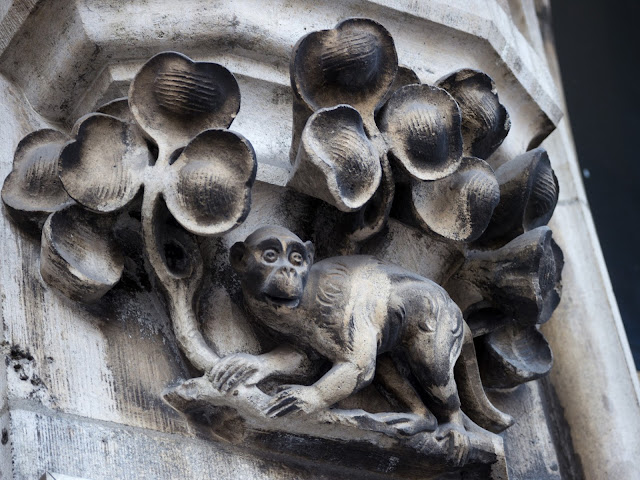 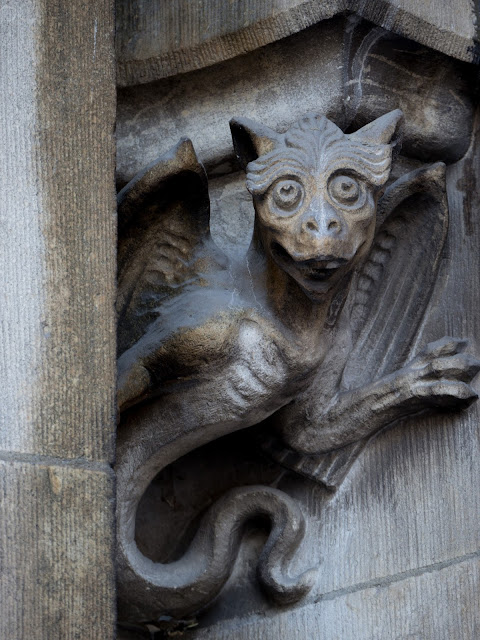 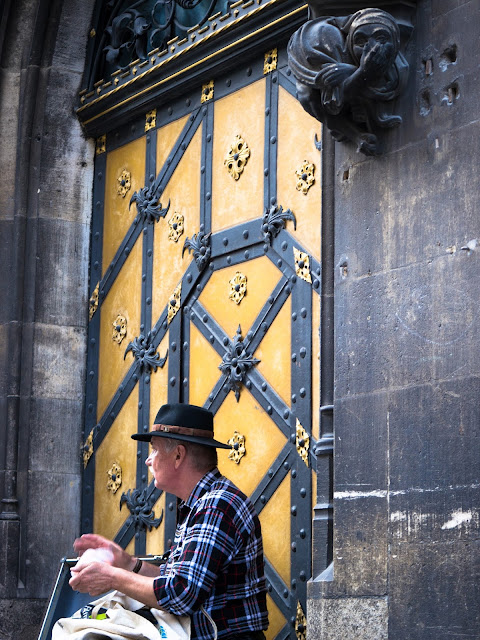 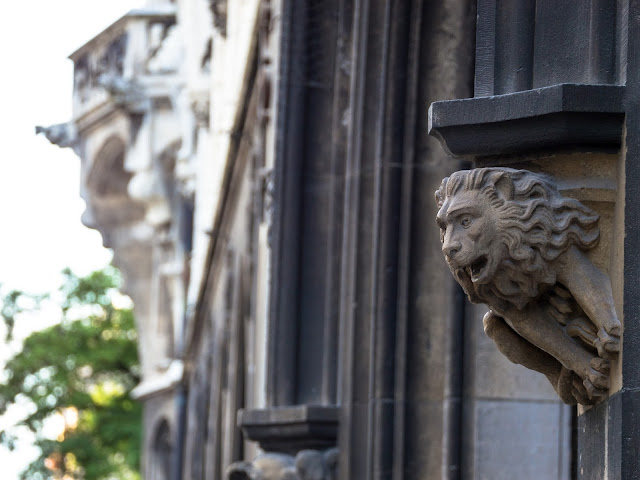 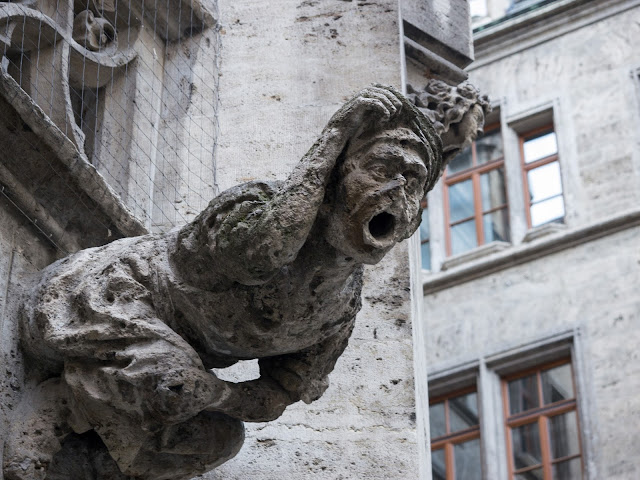 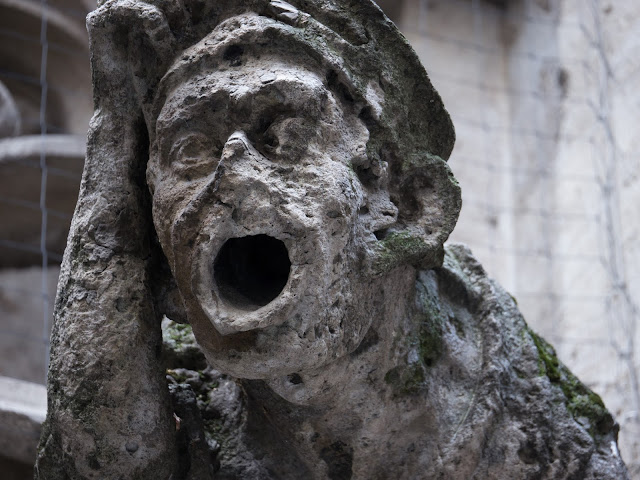 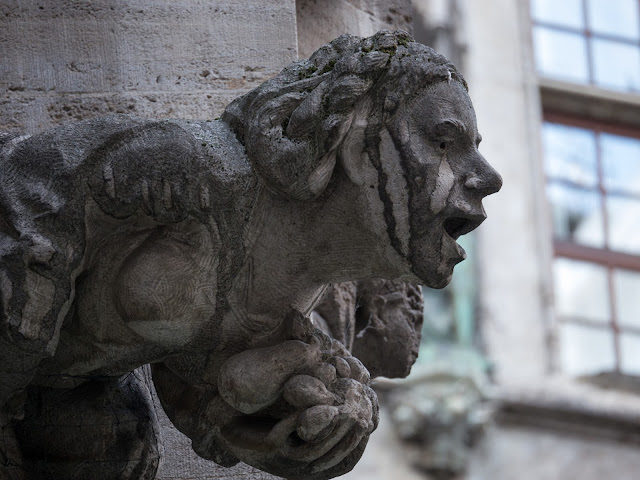 Mariensäule, located in the middle of Marienplatz square, is a hard-to-miss statue erected in 1638 to celebrate Bavaria's victory over Swedish troops during the Thirty Years' War. The golden statue of the Virgin Mary stretches vertically high into the air, balancing on a crescent moon as the Queen of Heaven.

The column is flanked by four additional figures at the bottom, each symbolizing the city's overcoming of different adversities: heresy represented by the serpent, hunger by the dragon, pestilence by the cockatrice, and war by the lion. 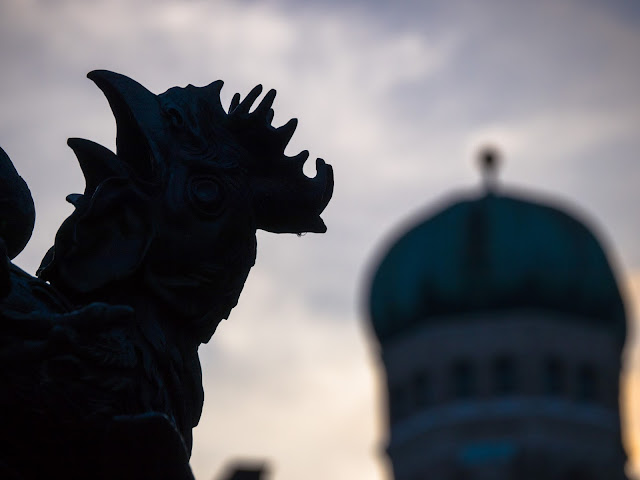 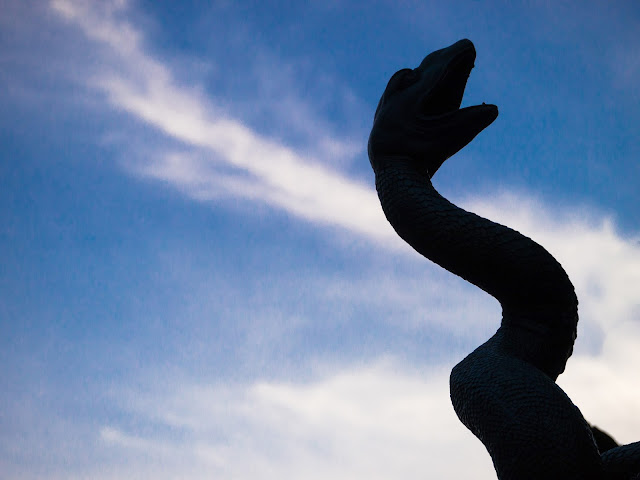 Peterskirche, close to Marienplatz, is the oldest church in Munich. Its 91 m high tower, which is known as "Alter Peter", offers the best panoramic views over the city. No matter you climb up the 299 steps or not, take a closer look at the church's exterior walls. In medieval times, a cemetery was built around the church, and only very important or holy people were buried in the church walls. As such, historic gravestones stand outside of the Peterskirche accompanied by a fascinating audience. 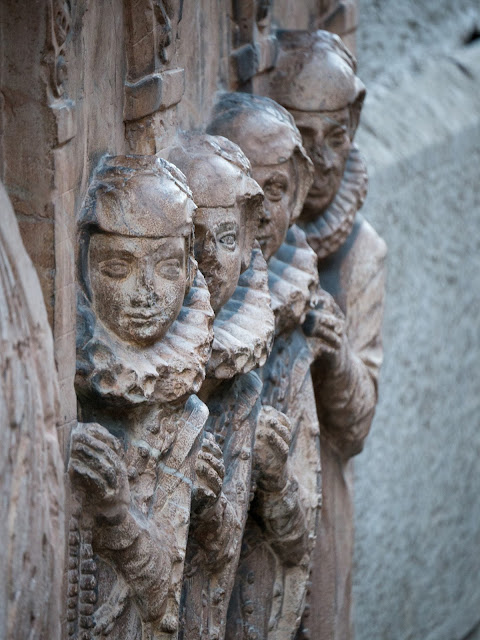 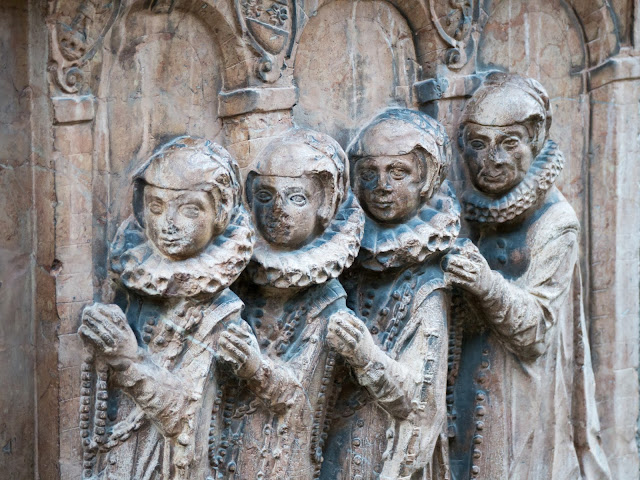 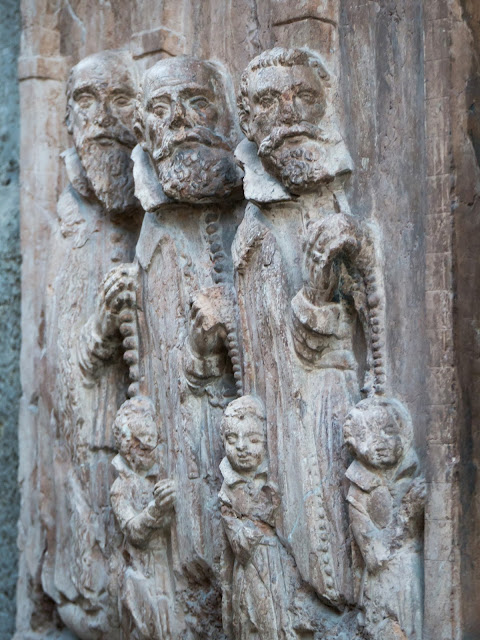 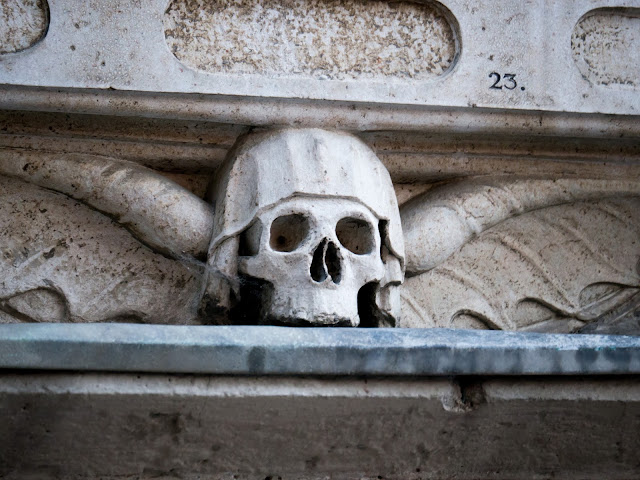 The Viktualienmarkt is a daily food market in the city center with its own little beer garden and plenty of booths to sample traditional food. Besides various food stalls, six memorial fountains to Munich's folk singers and actors are spread all over the market. The market closes at 8 pm and the vibrant atmosphere turns into a ghostly one, especially at full moon. 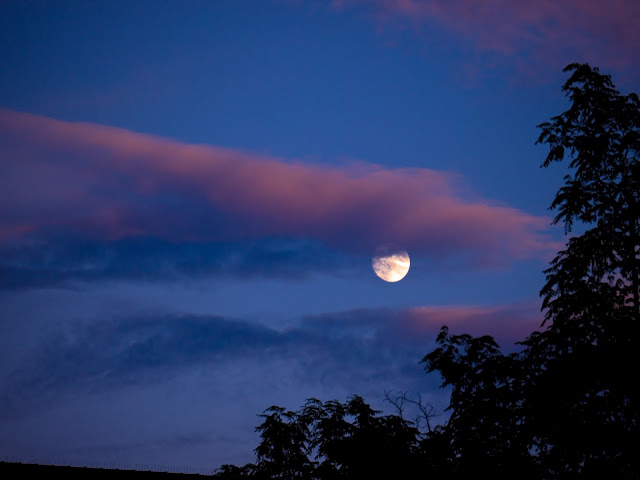 This pedestrian zone stretches from Karlsplatz/Stachus to Marienplatz and is the primary shopping area with numerous department stores, plenty of restaurants, open air cafés and beer gardens.  Don't forget to look up to the sky shortly before you reach the Karlstor. 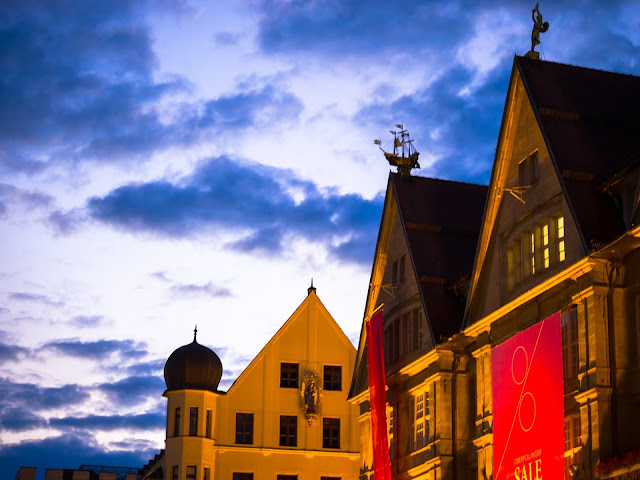 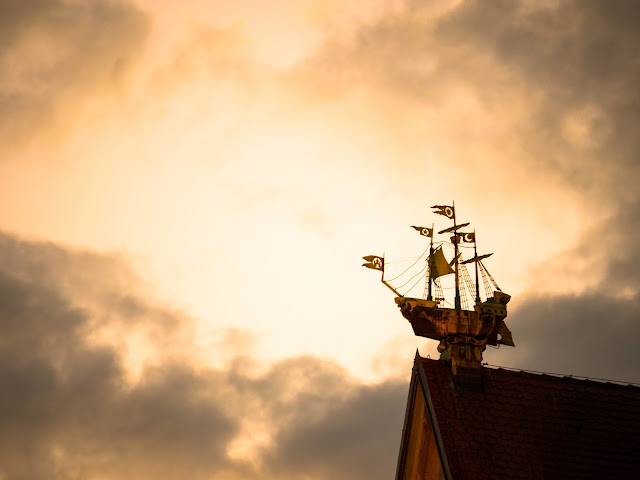 The Wittelsbach Fountain (Wittelsbacher Brunnen) is possibly the most exquisite fountain in Munich. It was built between 1893 and 1895 to celebrate the completion of the Munich's water supply system with the installation of a fountain. The fountain is flanked by two large marble statues, allegorical figures symbolizing the benefits and dangers of water.

Undoubtedly, there is a lot more to Munich's intricate and quirky details that I can hardly cover them all on a photo tour of a couple of hours. While I continue unearthing my Munich, stay tuned and check back soon!
Share on Facebook Share on Twitter