10/28/2017 Airborne , Day Trips from Munich , Europe , Germany Edit
Neuschwanstein Castle, known by most as the Disney castle in Germany, may seem like it was plucked straight from the pages of a storybook, but in fact it's the other way around. It’s this exact castle with its imposing silhouette perched on a rocky ledge in the seclusion of the Bavarian Alps that supposedly served as a blueprint for Walt’s iconic creation. It is a true fantasy come to life.


The eccentric ‘Mad King’ Ludwig II, who spent much of his kingdom’s fortune building castles, was obsessed with creating the perfect castle of his dreams. To make his grandest fantasies come true, he decided on this idyllic setting high in the hills, looking down on his childhood home. Sadly, the castle was still under construction at the time of his mysterious death at age 41. Just a day after he was dethroned in 1886, Ludwig II was found floating face-down in the shallow waters of Lake Starnberg along with the psychiatrist who had declared him insane. He only lived in the unfinished palace for a total of 172 days and never intended his castle to be accessible to the public. But seven weeks after his death, the castle was opened to the public and continues to draw over a million visitors to its grounds every year.

What it takes to visit the castle

From Munich, it's a 2-hour train journey to Füssen followed by a 10-minute bus ride to the village of Hohenschwangau at bottom of the hill where the castle stands. Then you have three options to get to the castle: a) Take a horse-drawn carriage (6€ pp, uphill); b) Take the shuttle bus (2€ pp uphill), or c) Walk (30-40 minutes uphill).

To take a tour of its interior, you'll find yourself waiting unless you arrive really early (around 9 am) or book the tickets in advance and queue a bit less. The castle's majestic and surreal beauty has a magnetic allure that you have to compete with thousands of visitors on any given day. The tickets (13€ pp) will only get you an interior tour of the castle, and not up the mountain to the castle. If you do buy a ticket, you will be assigned a time slot for your tour. Whatever method you take for getting up to the castle, make sure you are at the castle on time, or your ticket becomes void.

Is the tour worth the hassle?

Two of the four times I've visited Neuschwanstein, I took a tour of the interior as well. The tour is not very memorable and lasts only 30 minutes. You'll be rushed through the rooms, which were meant for a single person. in quite large groups with no chance truly savor the king's eccentric mind. Besides, there’s not all that much to see because only 14 of the castle’s planned 200 rooms were finished before funds for the project were cut. The tour only goes to some of the rooms, among others a magnificent throne room and singer's hall. While the castle has a decadent interior, it’s the spectacular alpine setting and its captivating exterior that truly enhances the castle's beauty. No interior could ever compete with that. So my answer would be a no (or you do the math).

Given that the photography is not allowed inside, I'd rather suggest you invest the money into a book from a gift shop and contemplate the castle's exterior and supreme setting as long as possible. Not without a reason, the fairy tale castle rises up above the Bavarian woods and here are five ideas on how to admire the castle from different perspectives.

How to best approach the castle

1. You can get that million dollar shot of the castle from Mary's Bridge.

From the Mary's Bridge (Marienbrücke) suspended above the Pollat Gorge, you get unobstructed views of Neuschwanstein from the side, though you'll have to put up with the crowds to get a spot.

2. You can get another phenomenal view of Neuschwanstein (and leave the crowds behind) from the trails on the other side of Pollat Gorge (cross the bridge).

Most people stop at the bridge and walk back to the castle. If you want to get away from the crowds, follow the path that continues across the bridge. You'll get similar views as the ones from the bridge with slightly different angles.

3. You can alternatively visit the Hohenschwangau Castle that sits in Neuschwanstein’s magnificent shadow and be sure to look up.

The older infamous castle is indeed a real castle dating back to 12th century, finished and fully furnished. It's an easy stroll up to the castle, where Ludwig II spent his childhood, and it provides a good spot to view the back facade of Neuschwanstein that was meant to be a grand recreation of Hohenschwangau Castle.

4. You can climb with the Tegelbergbahn cable car to head over to Tegelberg.

Some two kilometers from the castle there is a cable car called Tegelbergbahn. It takes you up on Tegelberg mountain, where you can start various hikes going downhill with some good views of the castle.

5. To take in the mind-boggling picture-perfect scene of the castle and really really leave the crowds behind, you can simply jump off Tegelberg! With a parachute of course :)

Of all my visits, this was by far the best experience ever. As much as King Ludwig II himself was obsessed with building the perfect castle, I was obsessed with taking the perfect flight in a hang glider above his dream castle. Over the course of last three summers, my attempts to combine the castle's majestic setting with the closest sense of flying like birds turned out to be virtually impossible forcing me to split my well-laid plan. The new plan suggested taking my very first nonmotorized flight in a hang glider elsewhere so that I would feel free to paraglide over the royal castle of Neuschwanstein. 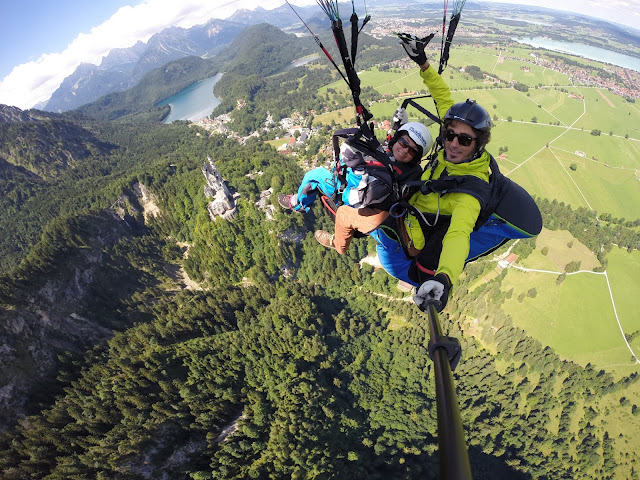 So be it! Last July, I was finally hanging in my comfy chair in the air, no big deal. Yet somehow butterflies still managed to infiltrate my stomach while making lazy circles in the sky. Flying is such an exhilarating experience on its own (check out my previous post focusing on the sensation of flying), but this time the focus is the payoff for jumping off a cliff. The king-size view over the famous, spectacularly set, fantastical castle of Neuschwanstein, the surrounding mountains, and the sparkling lakes around. That view that only your eyes can appreciate.


(I would love to know those people standing on the solid ground and laughing at me while I hesitate to walk into the void!) 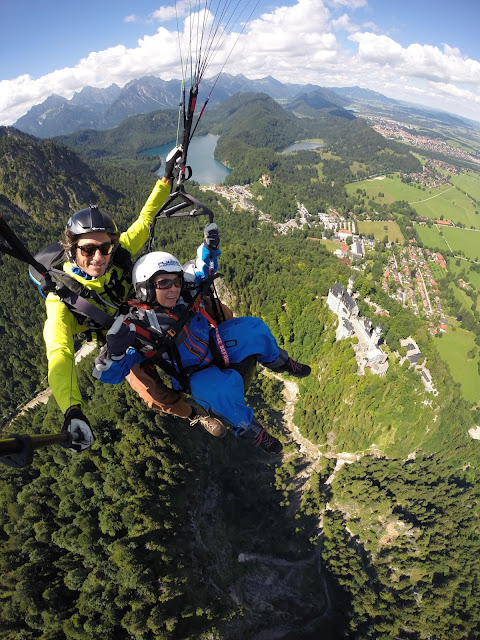 This is the money shot, folks. Savor it. 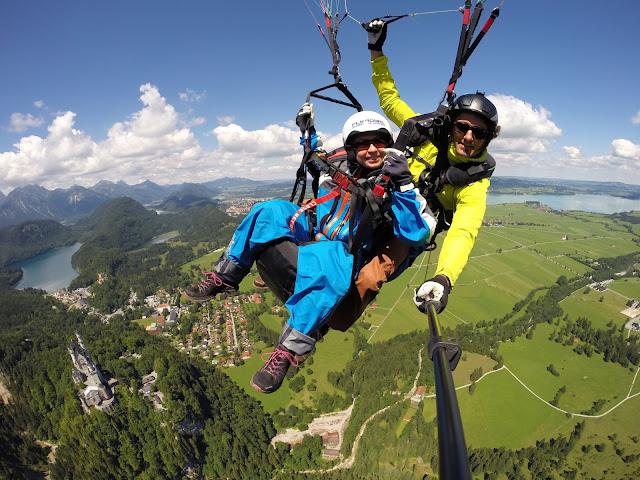 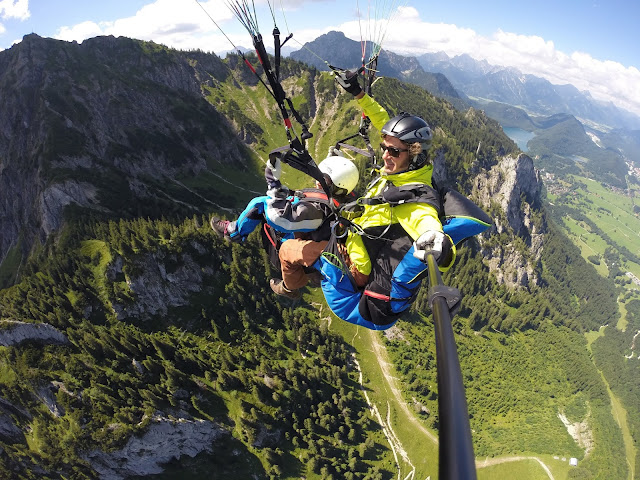 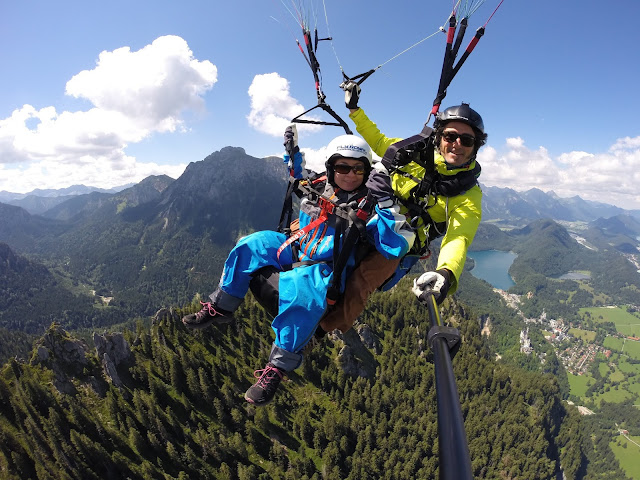