A Fascinating Ballet of Russian Robots in Exile

10/21/2017 Entertainment , Europe , Scotland Edit
When I am in a new city, I tend to spend most of my time strolling through the streets, instead of visiting the who knows how maniest castle, museum or similar attractions. But I make sure not to miss unique stuff, and a true oddity in Glasgow is Sharmanka Kinetic Theatre. Inside lies a bizarre collection of highly elaborate mechanical sculptures, brought to life in sync with a creepy mixture of music and light telling the stories of human spirit and Soviet Russia’s often murky past. 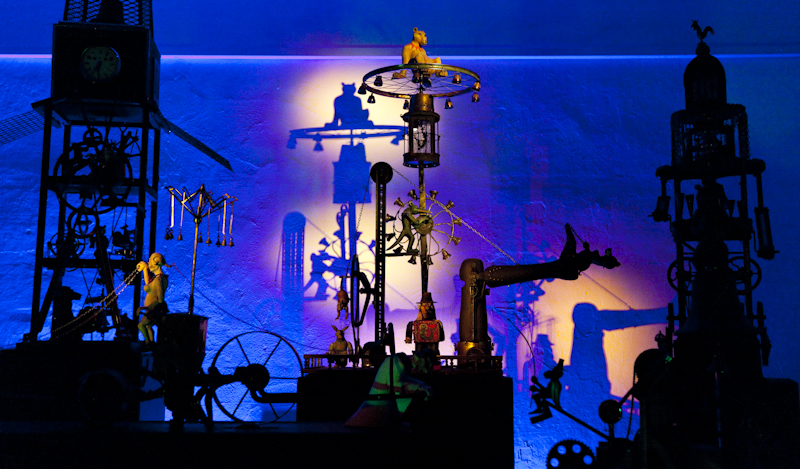 Eduard Bersudsky is a genius Russian-born mechanic and self-taught sculptor with an absolutely fascinating creativity. His intricate kinemats are full of unexpected twists and turns, surreal, wicked in humour and rich in content. Not only the amount of detail he managed to coax from pieces of old furniture, metal scrap, wheels of singer sewing machines and old motors (stolen from factories by friends or got on the black market in exchange for a bottle of vodka), and carved wooden figures is incredibly amazing, but also the 'brains' of his works determining the sequence of various motors to become operational are ingenious. 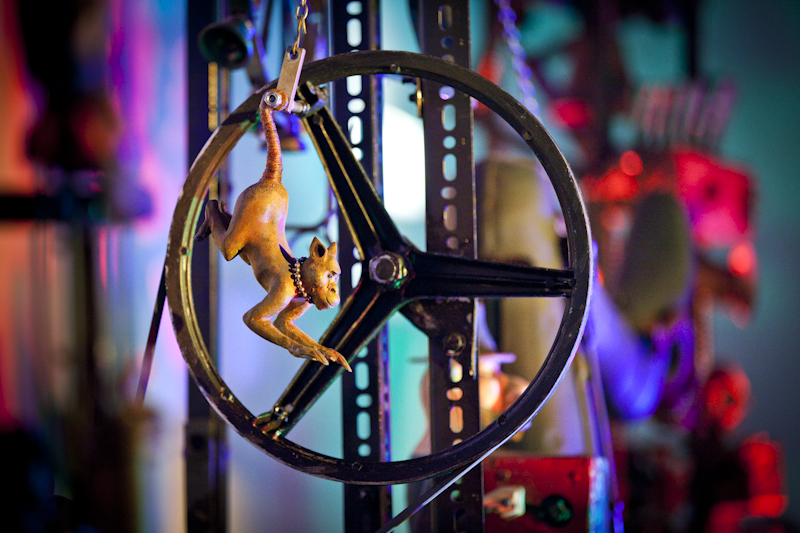 Accompanied by haunting soundtracks and synchronized light, the kinemats and their dancing shadows make for an unconventional, unmissable animatronic ballet performance in Glasgow.

The extraordinary mechanical sculptures and their stories are captivating even when not in motion, and Sharmanka is absolutely worth a visit - even if it means a detour from Edinburgh. I won't scramble any further for words to rave about this truly unique, arresting show, but instead, I'll leave you alone with some of Eduard's works and their stories taken from Sharmanka's press archives.

There is a story in the Bible that tells of the attempt by Babylonians to build a great tower, which would reach into heaven so they would be “like gods”. They could never finish or agree on it being finished. The Tower of Babel became a symbol of a futile attempt to build something ultimately grand. Everybody at this tower is frantically busy and yet nothing really happens. Everyone has an illusion of the importance of his work, of his power. But follow the pulleys, wheels, and strings: they lead you to somebody else who thinks that it is him who is in control. There are some characters from Russian history depicted: Lenin making his speech and Stalin with his axe.

Eduard Bersudsky recollects: “As a child, I lived on the corner of Dostoevsky and Candle Streets. There were often beggars in the doorways. They had accordions and as soon as they started playing, everybody would open their windows to watch them, then wrap money up in bits of paper, as much as they could, and throw it down. The children who were with the beggars would look for it.

Everyone would point and shout: “There is some, over there.” It was the time of the postwar collapse. We had to survive. For some reason, I remember a man in a hat. He had a box and on it was a guinea pig and in front of the guinea pig was another small box. The man would take money from passers-by and tell the guinea pig: “Come on, Mashka, look for it.” The guinea pig would bend its head and from the box take a piece of paper, on which was written the fate that awaited the person.”

Check out the shows and opening times on Sharmanka's official website: www.sharmanka.com

For a truly eerie experience, I highly recommend the full shows lasting 70 minutes.

Don't forget to check out Sharmanka's tours and exhibits traveling around the world—you may be the lucky person.

Taking photos or videos is prohibited during the show. All audio-/visual materials used in this post are taken from Sharmanka's Flickr and Vimeo archives, where you can find a whole bunch of other photos and videos. Sit back, relax and enjoy!