10 Things You Didn't Know About Japan!

6/06/2018 Asia , Japan , Tidbits Edit
I would bet that Japan is one country you think you might know something about as far as countries of the world go (as opposed to say, Papua New Guinea). However, even if you have visited Sunrise Land (or yet to visit), you may be missing some of the finer details. Here are ten things you may not have known about the country until today.

So honest that they may even deny service if they believe they wouldn't be able to serve you to your full satisfaction. For instance, if you don't have the exact address and the taxi driver does not know the place, s/he would refuse to drive you, as the fare might get expensive while searching for your destination (more on this topic later).

Here is a very simple example: Prior to buying tickets for Fuji Shibazakura (lawn cherry blossoms) Festival, it was made clear to us —not only with words but also with pictures— that the full bloom was over with less than 50% flowers left at that moment. We went anyway and got disappointed but it was solely our decision. 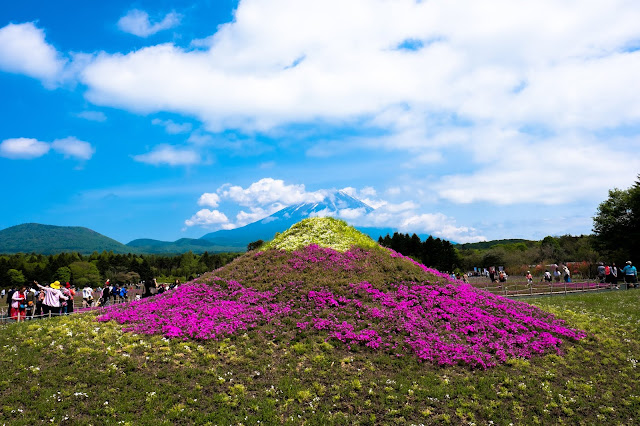 Similar situation when buying bus tickets: No refund if paid with credit card, and the bus company would not be liable for traffic jams. Okay, fair enough!

One of the weirdest moments was when we stood at the ticket/check-in counter to pay for our reserved ferry tickets to Mikura Island and get the boarding passes, actually a straightforward process we had done before. This time before making the payment, the lady explained to us that the ferry would depart but there would be no guarantee for making it to the island. The ferry might have to turn around due to bad sea conditions. In case of no landing, we would get the ticket fee refunded. Eh, sorry what?!? Just two hours before the scheduled departure, such a forecast cracked us up and at the same time caused for a little worry. But we knew that the people were just being overly cautious. Eventually, we were able to get onto the island as scheduled and even returned back to Tokyo as scheduled.

Coming back to service denial topic...On our first night in Tokyo, we headed to Kabukichō, the red-light district in Shinjuku, Tokyo. Just around the corner of the Robot Restaurant, I couldn't help but stare at a place called 'Man-zoku Station'. While I was trying to figure out what this place was about, two Japanese men came out grinning ear to ear. As soon as our eyes made contact, we all burst into laughter. Obviously, they had some sort of fun and I, as a lady, was standing still and staring at them. Tom and I then walked past, but a few minutes later we found ourselves inside the Man-zoku Station—just because I wanted to find out so badly why those guys looked so happy. End of the story? We were politely shown the way out. Later, Google suggested this place as being sort of a strip club with special services, and they don't serve you if you can't speak Japanese. The services offered were written in acronyms that I couldn't get their meanings but kinda can imagine. Male readers: Don't worry. There are other places just around the corner welcoming foreigners as well. Enjoy the service! 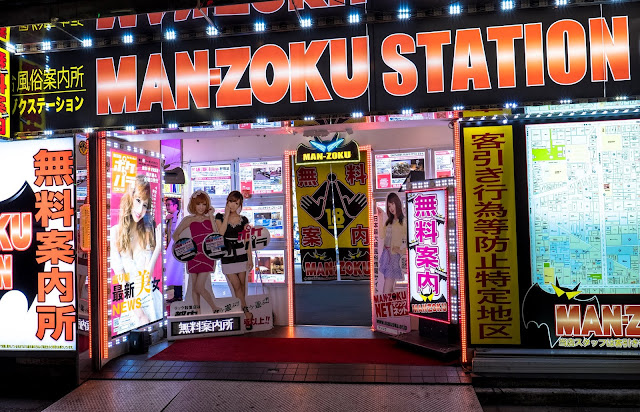 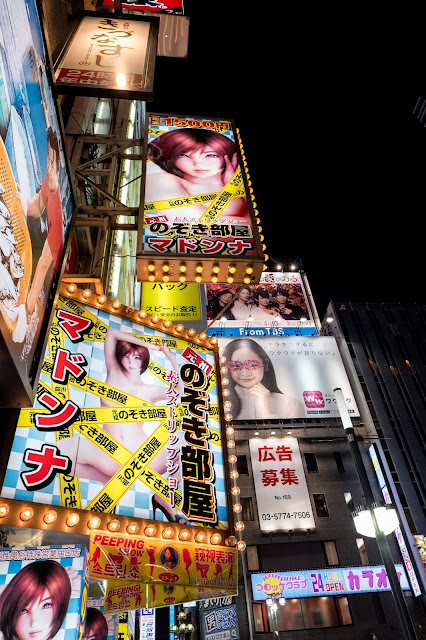 2. There are vending machines everywhere.

There are about 5.52 million vending machines around the country, 1 per 25 people, where you can buy anything: soft drinks, hot or cold coffee, alcohol, ice cream, wet wipes, and so on and so forth. 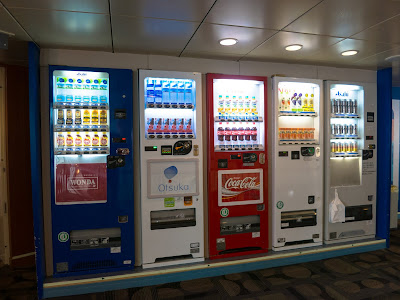 The most interesting machines for me were the ones designed for getting food tickets at Shibazakura Festival. You first purchase your ticket from the respective machine and hand it to the staff at the respective food stall. Even to this day, I didn't quite get the idea behind. The lines were not getting shorter this way, so it can't be that. Perhaps for hygienic reasons so that the person preparing food does not touch the money? Or to replace manpower with machines? Perhaps. 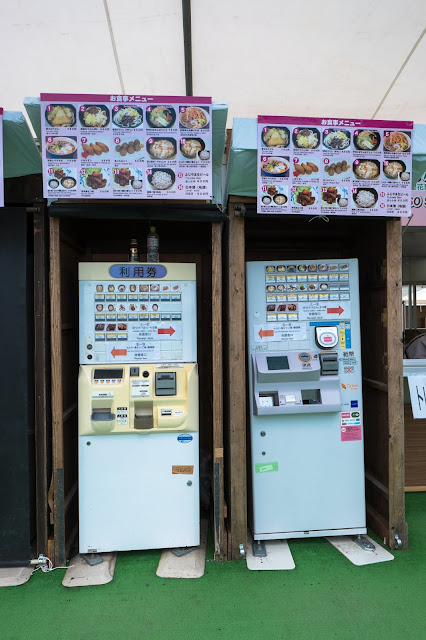 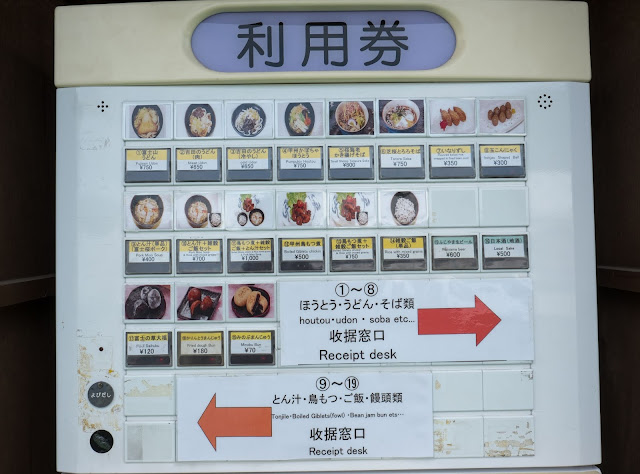 3. In Japan, people are interested in your blood type.

A common question just like someone asking your Zodiac sign was part of the feedback questionnaire that Kazumi San asked us to fill out, along with understandable questions like email address and birthday.

4. Do not expect to get cheaper electronic gadgets in Japan.

Mount Fuji had sort of a magnetic force that we first lost Tom's phone and luckily found again within hours. But we apparently had to sacrifice our power-bank to Mount Fuji instead. It just occurred to me five minutes before the bus departure that we had left the power-bank at the restaurant table. In a rush, we decided to replace it in Tokyo instead of getting out and taking the next bus. But it turned out that buying new bus tickets would have been much cheaper. The brand I had bought in Germany on Amazon for roughly 20 EUR would cost in Japan over 100 EUR. In the end, we bought some other brand for around 40 EUR with less power capacity and paid more than the bus ticket fare for the two of us. I am quite sure that our power-bank would still be there waiting to be picked up by us when we return.

5. Not all toilets in Japan are very high technology.

After all, you are in the country known for its hi-tech gadgets, you'll almost always be able to find a Western-style toilet. Many come with an array of options along the side for your visiting pleasure —heated toilet seats being my favorite. 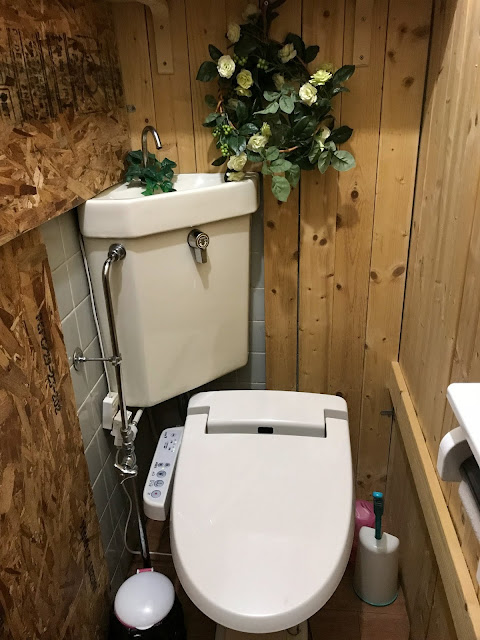 But squat toilets are still common, and if you do come face to face with one, don’t panic. Simply follow the idiot-proof instructions on the wall. 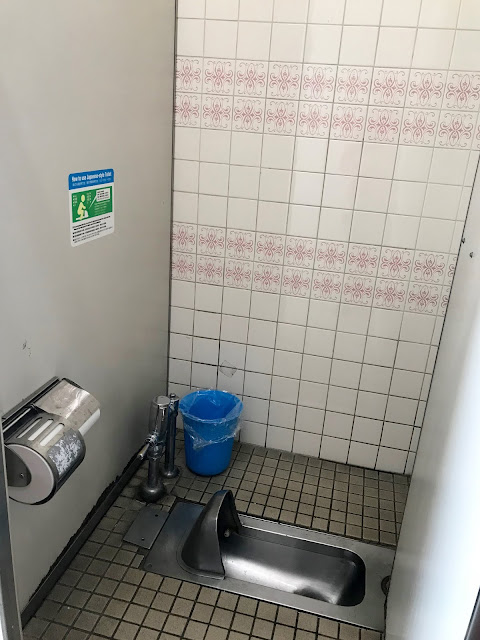 Speaking of the technology, by the way, it's true that Japan is ahead of the rest of the world in more than just time, but they are not far too advanced in technology either. The bullet train is not as fast as you'd expect and the Robot Restaurant is, in fact, a cabaret show performed by humans in robot costumes.

Sumo is the sports people most often associate with Japan but baseball is actually its most watched, played and cheered one. So popular that you can even watch baseball games on TV in men's sauna while visiting a public bath.

7. Affection and emotions are not displayed in public.

People don't show their emotions in public and most of the time they appear like robots. Also hugging and kissing your new Japanese friends in greeting can make people uncomfortable, unless you spend the night together in the common sleeping area on a ferry :) Let me elaborate.

Japan, being an island nation, is naturally home to an extensive network of ferry routes. In the midst of Golden Week holidays, where the entire country is on the move, we opted for the ferry line from Tomakomai to Nagoya with two overnight stays on board of Kiso, a large ferry equipped with a range of amenities such as public baths, a restaurant, karaoke rooms, a theater and more. 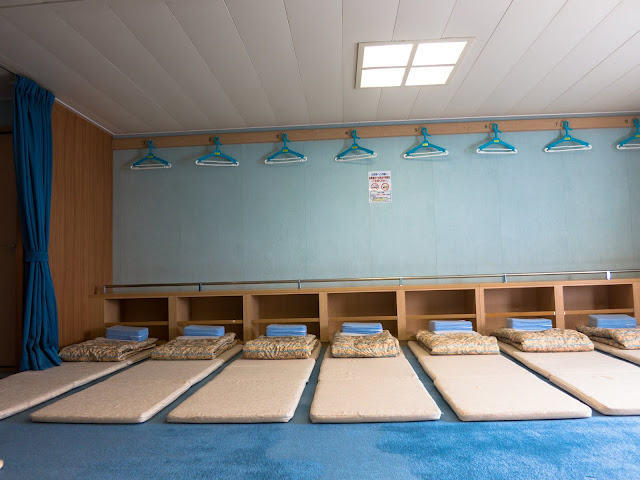 As for sleeping in the common area, 16 tatami mats were arranged next to each other with barely any space in between. On the first night, I and fifteen other ladies and kids laid side by side like sushi in a box, but I slept like a baby. Meanwhile, in the men’s room next door, the situation was apparently a bit different. Tom had got a slightly well-fed guy as his neighbor who unintentionally kept insisting on cuddling during the night. Not being able to fall asleep, Tom finally would move out of the room in the middle of the night to have a few hours rest in the chairs upstairs. While on the second night there were only three others in my room, Tom would get a kid next to him to cuddle. But he would remain in his bed this time (good boy :).

8. You take off your shoes. Everywhere.

Everywhere from restaurants to temples, hostels, and guesthouses. And even gyms/swimming pools can require their guests to remove shoes. How do you know that you should remove your shoes or not? Either you recognize the party easily, or in touristy places like Furano, they put signs in English reminding you to take off your shoes. What do you wear instead? Indoor shoes or socks. Many places provide guests with complimentary slippers, but having your own shoes that are preferably easy to put on and remove would be very wise.

You will often find yourself carrying around your trash in search of an appropriate waste, sometimes fallen into oblivion in your bag for days. Interestingly, Japanese people aren't throwing their trash on the ground because Japan is quite clean and they diligently recycle. But no trash bin around! How come? What is the secret!?

The convenience stores (konbinis) in Japan are incredible. They have everything: from clean bathrooms to free wifi, from lunch boxes to trash bins (yeah, this is the secret!). Most of them feature a corner where you can sit and enjoy your meal that they warm up in the microwave for you. Konbinis are an essential part of Japanese life, and without them, I am fairly confident that your average backpacker would starve.

You can find a permanent Maibaum installation in Sapporo City! A piece of home away from home that we came across serendipitously on May 1st. What a coincidence! 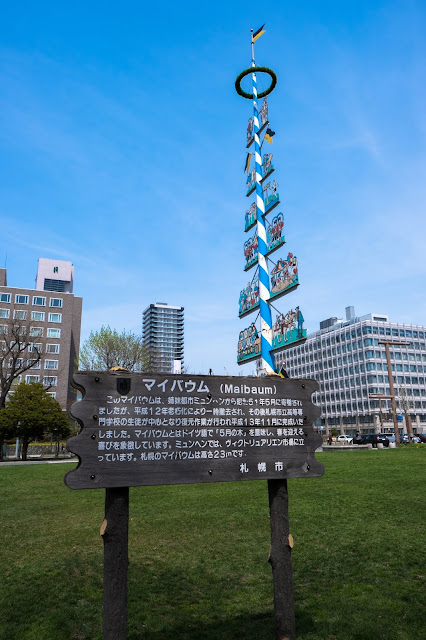